Pete Davidson was in good spirits on 'SNL' Saturday night and turned his personal crisis into a pretty funny bit.

During the Weekend Update segment, Pete appeared with John Mulaney and addressed the rough patch he's had, in particular, the alarming suicide threat he made back in December.

Mulaney says he spent a lot of time with Pete trying to get him back on the straight and narrow, and Pete's response will make you laugh, even though the subject is dark.

Social media gave Pete mixed reviews, but judging from last night he seems like he's back in the game. 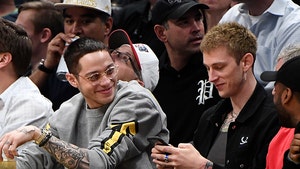