Sophie Turner's giving new meaning to the term "slapstick" ... at the expense of Conan O'Brien's face!

The "Dark Phoenix" star was on "Conan" Wednesday night, and told him and Andy Richter about a drinking "game" called Tequila Slaps she played with her fellow 'X-Men' stars. Pretty simple rules: take a shot of booze and someone slaps the crap outta you before you can even swallow.

Conan seemed game, but grew apprehensive as the shots were poured. Still, he knows a good bit when he sees one -- ratings, baby -- and stood up to face Sophie the Slapper.

It went down exactly as she said it would, but the look on Conan's face at the moment of contact was priceless.

Sophie was immediately regretful -- seriously, it was an incredible slap. Conan's review? The most excitement he's felt in a long time.

Now ya know ... if you see Joe Jonas out in public with a bruised cheek, or handprint on his face -- he and wifey were probably just doing shots!

Of course, Sophie plays Jean Grey, aka Phoenix, in the next installment of the 'X-Men' franchise ... which hit theaters Friday.

We can't imagine who would dare to slap Phoenix, but Sophie says her costars did ... including the guys. 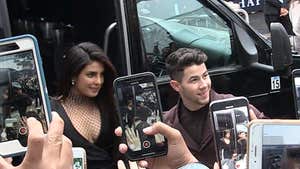 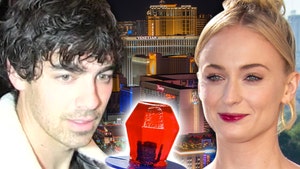