Rafael Nadal DESTROYED a reporter who asked the tennis star if his recent marriage caused him to play like trash Monday ... telling the journalist his question was straight-up "bulls**t."

Nadal married his childhood sweetheart, Xisca Perello, in Spain last month ... and in his first big competition at the ATP World Tour Finals since the nuptials, he got wrecked by Alexander Zverev in straight sets, 6-2 6-4.

Last year’s champion triumphs 6-2, 6-4 & defeats Nadal for the first time in his career 👌

So, a reporter asked him afterward if perhaps the reason for his poor play was because of his recent wedding vows ... and that's when Nadal started to tee off.

"Honestly, are you asking me this?" Nadal said. "Is [this] a serious question or it's a joke? Is it serious?"

The reporter pushed forward ... but Nadal kept the clap-backs coming.

"I'm surprised," Nadal said. "It's a big surprise for me you ask me this after I have been with the same girl for 15 years and having a very stable and normal life."

"It doesn't matter if you put a ring on your finger or not. In my personal way, I am a very normal guy."

Finally, Nadal ended the uncomfortable exchange by saying, "Okay. We move to Spanish because that's bulls**t. Thank you very much."

For as awkward as the encounter was ... Nadal kept his cool for the most part -- which is good news for the guy, considering he's got to play another match on Wednesday.

Can't wait for that post-game presser! 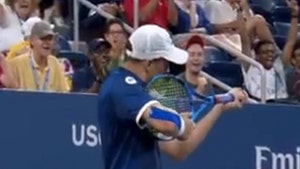 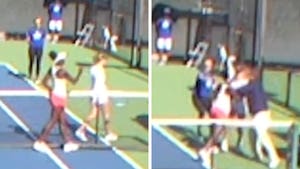