2:22 PM PT -- Law enforcement sources tell TMZ ... Sean was found by a family member at his San Bernardino home around 8:45 PM on Friday night. He was transported to a hospital, but after life saving measures proved ineffective ... he was pronounced dead upon arriving.

We're also told no foul play is suspected at this time. However, an official cause of death is pending an autopsy, which hasn't been conducted yet.

Blabbermouth first reported the the news that the musician was found unresponsive Friday in his Southern California home. No other details about his death have been released.

The guy is credited for helping pave the way for the niche rock genre, as he was a founding member of the '90s band Cynic as well as a brief member of Death. He played drums on their revolutionary record, "Human," in 1991 ... a major factor in defining modern metal.

"Human" has been ranked as one of the most influential guitar albums of all time. It has sold hundreds of thousands of units since its original release date.

Some of Sean's other acclaimed works -- besides his contributions on "Human," of course -- include his part in the awe-inspiring Cynic album, "Focus," which got released in 1993. The band broke up for a while after that but got back together in the 2000s for more music.

In the late '90s, Sean and other members of Death formed a new alternative band called AEon Spoke, which put out two albums. He eventually left his longtime band, Cynic, in 2015.

The official Death Facebook page commented on Sean's passing, writing ... "RIP to an absolute monster and genius on the drums. I’m speechless and have no details."

Sean is reported to have been just 48. 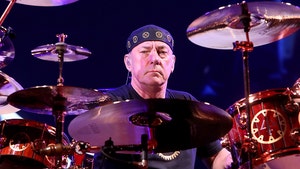