That's Joe Burrow making Bengals fans feel A LITTLE better -- telling media at the NFL Combine he won't hold out (or force a trade) if selected with the #1 pick in the NFL Draft.

Joe Burrow on the draft process. He said “of course” he’d like to be the first pick in the draft. pic.twitter.com/B9qSrs8zVl

But Burrow is pointing the finger at the media -- saying, "You guys [in the media]  kind of took that narrative and ran with it. There has never been anything like that from my end."

As for recent comments about having "leverage" going into the 2020 Draft -- Burrow explained he was referring to his workout at the NFL Combine -- saying he won't be pressured into doing drills he doesn't feel like doing.

Burrow insists he was NOT trying to imply he would force his way out of Cinci.

In fact, when asked about the likelihood of being drafted by the Bengals, Burrow pointed out the team is located about 2 hours from his home in Ohio ... and he he could go home for dinner if he wanted to.

So, ya still think Burrow will suit up for the Orange and Black for Week 1? 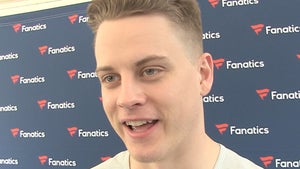 Joe Burrow Will Spend First NFL Check On A Personal Chef, Here's Why