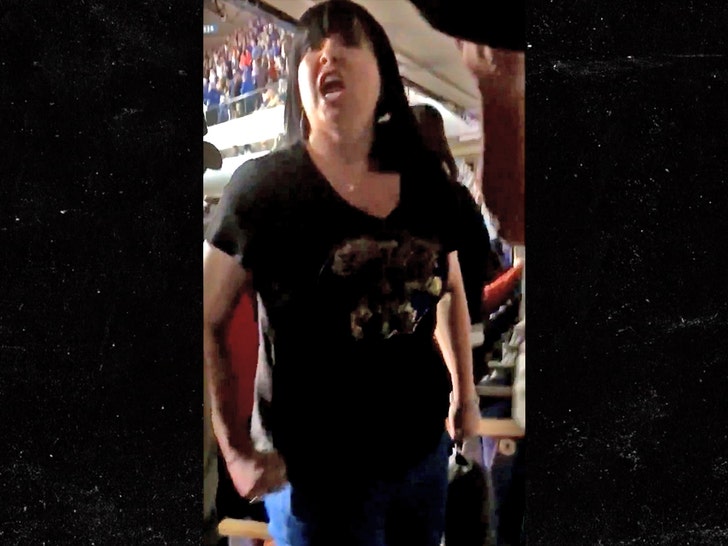 "We have permanently revoked ticket privileges for all UK Athletics events from the person who made the abusive remark at Tuesday night’s game, effective immediately," UK AD Mitch Barnhart said.

"This misconduct is unacceptable, unwelcome at the University of Kentucky and not reflective of our values."

1:31 PM PT -- TMZ Sports spoke with the Volunteers fan who was on the receiving end of the hateful comment ... and he says, "There is no excuse for her actions."

"There were plenty of Kentucky fans around before her that said good game and headed out, but she made a conscious effort to make the comments that she made," Ethan Williams tells us.

"I felt like it needed to be shared and that the university needed to be made aware of the incident, because it's 2020 and competitions should be able to be enjoyed by all fans."

The Kentucky Wildcats fan who spewed the N-word at a Tennessee Volunteers fan during a college basketball game Tuesday night is now apologizing ... acknowledging her words were "hurtful" and "hateful."

The disgusting scene went down as the Vols were in the process of upsetting the Wildcats on their home court at Rupp Arena in Kentucky.

As UK fans were leaving early, Vols fans were talkin' some harmless smack -- when a woman named Ashley Lyles turned to a heckler and shouted, "N****r ass."

Yeah, she used the hard R ... and it was all captured on video.

The footage went viral and the University of Kentucky called her behavior "unacceptable" ... vowing to take some sort of disciplinary action against the fan.

After she was shamed across the Internet, Lyles issued an apology ...

"My reaction after the game was unacceptable, period," Lyles said.

"It was against all values of the University and state of Kentucky. I humbly apologize to the individuals at which my words were directed. My words were hurtful and hateful and have no place in this world."

"I apologize to the University and state of Kentucky for the embarrassment I have caused. I want my apology not just to be in words, but in actions moving forward."

The Univ. of Kentucky has reached out to the man who was the target of Lyles' verbal attack and the athletic director says he has personally apologized on behalf of the school.