See's Candies Suspends Production Over COVID-19, Only Second Time Ever

See's Candies -- perhaps the most iconic chocolatier in America -- is facing a bittersweet ending (for now) ... halting production because of coronavirus, which makes it a historical pause.

See's made the announcement this weekend, saying it was temporarily closing up shop and suspending production of its famous chocolate sweets across the country. In their words, they say, "Given the current events with COVID-19, and our concern for the health and safety of our employees, we have made the decision to initiate an interruption once again."

#StoryTime 📖 See’s Candies’ story began 99 years ago. From Mary See’s kitchen to opening shops all across the nation, quality, tradition and service will always be ingrained in the See’s legacy. Thank you for the continued support and loyalty during this unprecedented time ❤️ pic.twitter.com/8HqNPOVEib

They continued, "We will work to keep you updated as we develop plans to safely resume operations." The official See's website won't even let customers place any new orders at this point -- explaining it has also put a stop to shipping of any new candy.

See's hasn't closed its doors or stopped working since the 1940s, when it interrupted production back then because ... well, the global war that was going on, and rationing provisions placed on the country. Since then though, it's been up and running ... until now.

They've been in business since 1921, opening up their first location in Los Angeles and going on to establish multiple locations across the U.S.A. -- with the Bay Area becoming their HQ. The See family follows the age-old recipe of their matriarch, who's also the kind, old face you see on every See's box of chocolates ... Mary See.

See's has been channeled in and out of pop culture for decades -- perhaps most famously through 'I Love Lucy' and the chocolate factory conveyor belt scene that became iconic ... as Lucy and Ethel tried their hand at wrapping and packing chocolates in hilarious fashion.

Of course, there's also 'Forrest Gump' and its own legendary references to boxes of chocolate. The list goes on and on -- See's has always been there either directly or indirectly.

BTW, it's a huge blow to the company's bottom line, no doubt. Over the years, See's has raked in hundreds and millions of dollars a year in profits. So, this is probably gonna hurt. 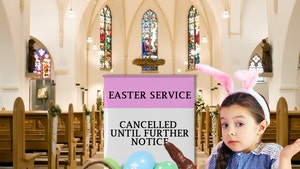