The entire Emergency Response Team at the Buffalo Police Department has resigned in a show of solidarity for the cops suspended for shoving an elderly man to the ground.

A total of about 57 officers walked off the job Friday, though they are still employed with the police department -- just no longer on the ERT ... according to WIVB reporter Dave Greber.

The move comes less than 24 hours after video surfaced showing cops in heavy gear shoving 75-year-old Martin Gugino even though he was NOT being physically confrontational. A rep for Buffalo PD allegedly told a lcoal reporter the man was injured when he "tripped and fell," but the video shows that's clearly not the case.

Gugino started bleeding from his head and lay motionless immediately after his head hit the pavement.

The Buffalo Police Commissioner took swift action in announcing the 2 officers involved were suspended without pay. The Mayor of Buffalo said he was deeply disturbed over the incident, adding the elderly man is in serious but stable condition. 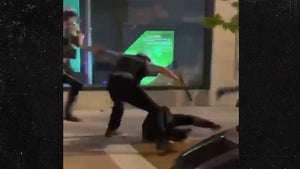