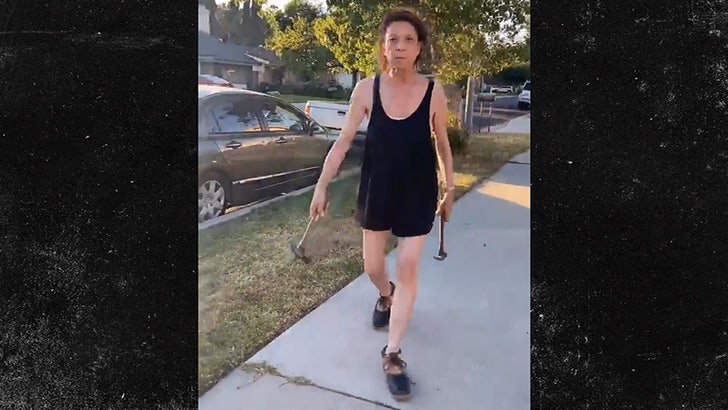 A racist woman in L.A. brought hammers to a face-off with her neighbors -- whose car she proceeded to smash up ... which got her an ass-whooping.

Check out this video that was shot earlier this week in Chatsworth, just outside of central L.A. in the San Fernando Valley. The video picks up with this older white-looking woman using two hammers to bang up the side of her neighbor's sedan. You only see her hit it twice once the camera starts rolling, but if you take a good look along the exterior ... it looks like she went to town on it beforehand.

The woman proceeds to walk toward the neighbors with both hammers in hand, almost as if she's going to attack -- but she stops, and tells them to "get the f*** out of this neighborhood." She then tells 'em to call the cops, but the neighbors are way ahead of her.

While one of the neighbors is heard off-camera talking to an operator describing the situation, this new 'Karen' knocked over their recycling bin with a hammer, and headed back to her stoop. What happened next is wild -- another nearby neighbor came over and manhandled this woman on their own.

The guy who posted these videos -- Edy Perez -- tells us he and his roommates moved into the house next door to this woman early last year ... and says she's been hurling racial epithets at them since day one. He says they never retaliated ... just ignored her.

Fast-forward to Wednesday, and he says his sister heard banging from insider their house ... and low and behold, he says she saw this next-door neighbor of theirs doing this for no reason at all. That's where things get rolling in the clip, and it's all downhill from there.

Now, Edy says this woman was arrested ... but got cut loose the next day due to COVID-19. We checked the L.A. County Sheriff's Office site, and sure enough ... a woman by the same name was in fact arrested that day and cut loose less than 24 hours later.

It's unclear at this point if it's the same person.. Meanwhile, Edy's started a GoFundMe page to help with the damage to his car, as he says he doesn't have full coverage.