3:41 PM PT -- Torrance police have identified this "Karen" as 56-year-old Lena Hernandez from Long Beach. They say she's been involved in at least 3 racial incidents in which criminal reports were taken.

During one incident this past October, cops say Hernandez allegedly harassed a custodian and physically assaulted a Good Samaritan.

6:19 AM PT -- 6/12 -- A new video -- which is somehow even more disturbing than the first -- has surfaced of SoCal Karen. The clip shows the woman confront an Asian man in a parking lot and launch a series of racist remarks at him. We're told this incident happened after the first one, but on the same day, and a police report for criminal threats was filed this time. Cops are still working to get in touch with the woman.

2:42 PM PT -- Law enforcement sources tell TMZ ... cops have now spoken to the young woman exercising at the park and we're told police took a report for misdemeanor criminal threats. Our sources say cops are now working to locate the woman who spewed the racist tirade. When cops wrap up the investigation, we're told they'll submit the case to the city attorney.

New rule (apparently): Where there's a park, there's an angry white woman -- aka "Karen" -- spewing hateful, racist words ... and this winner does her biz in a Southern California park. Meet Torrance "Karen," everyone.

Her tirade went down Wednesday at the Charles H. Wilson Park in Torrance, CA ... because she was pissed a young woman was using a set of stairs to exercise. Now, she claims "Karen" intentionally walked through her workout ... and, as you see in the vid, she said "Jesus" ... which set off "Karen.'

She jumped in headfirst, threatening violence ... "Next time you ever talk to me like that, you're gonna get your ass kicked by my family. They're gonna f**k you up!"

She continued to unload profanities, and then quickly got racial.

The vile woman then tells her to post it on Facebook and threatens more violence, before finally -- and strangely -- laying into her for wearing black clothes in the California sun. Seriously? Pick your beef "Karen!"

The young woman working out told reporters she was in shock over the lady's attack and it's left her shaken and afraid about returning to the park.

Torrance PD is investigating the incident. 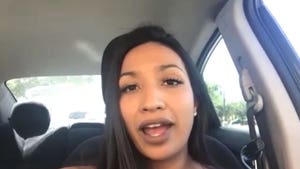