A paragliding instructor in Turkey just took his business to new heights with a stunt that's sure to attract daredevils and couch potatoes alike -- 'cause he's got a two-for-one special that appeals to both.

Hasan Kaval rigged a sofa and a TV to one of his paragliders this week ... and then proceeded to take flight off a cliff, while capturing the whole thing on camera. What happens next is a lazy adrenaline junkie's dream -- doing something dangerous and thrilling, while being able to relax and take a load off at the same time. Genius!

Now, the man himself showed us how it's done with a full-blown airborne demo. While the couch was in the sky (above the water below), he kicked off his shoes and swapped them for slippers, started eating chips and drinking soda ... and watching 'Tom & Jerry' to boot.

And, get this ... the guy wasn't even properly strapped in!!! No matter though, at least to him. Hasan landed the couch safely (somehow) and said afterward with a straight face that he felt secure and relaxed the entire time. Granted, he does this for a living!

It's too early to tell if this is the new wave in paragliding -- but hey, if he can get folks off their ass at home after seeing this ... we'll credit him with the trend. 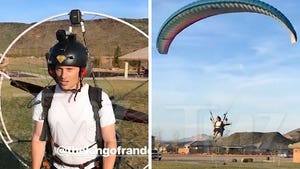 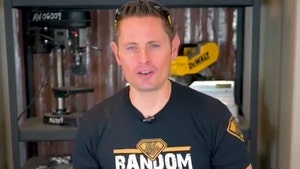