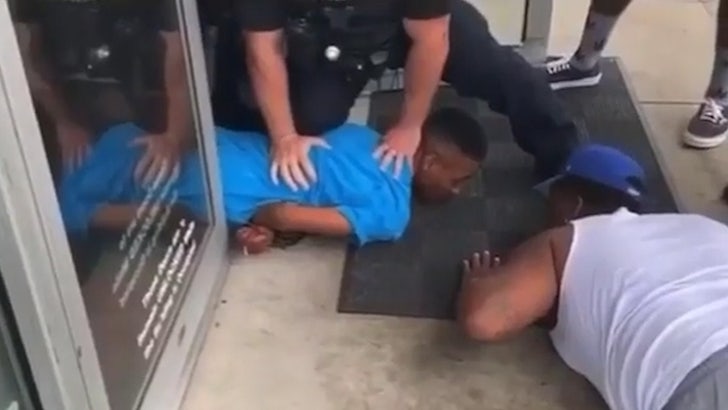 This could be the textbook case of how to de-escalate when cops make an arrest, and it has the stamp of approval of one of the leading civil rights attorneys in the country.

Attorney Ben Crump just said this is how it should be done ... with an emphasis on non-violent police tactics in subduing a suspect.

A Houston man was at a gas station Friday, and others present say he appeared to be under the influence and armed, possibly with a butcher knife.

Police came and tried placing the man under arrest. When he's on the ground, you hear a bystander implore the officer, "Don't get on his neck, now."  The cop responds, "I'm on his back."

And, then something startling happens. The officer asks for bystanders to help him. Some people who were present thought the officer was being sarcastic, but he wasn't.

The bystander, whose name is Ulerick Fields, tries to calm the suspect down.  You hear him say, "Chill out. They're going to put the handcuffs on you. Give them your arm, man ... I don't want you to get hurt, man."

In the end, the suspect was not taken into custody but rather to a hospital for mental evaluation.

Houston Police Chief Art Acevedo was so pleased with the way the arrest was handled, he talked about using it as a training video.