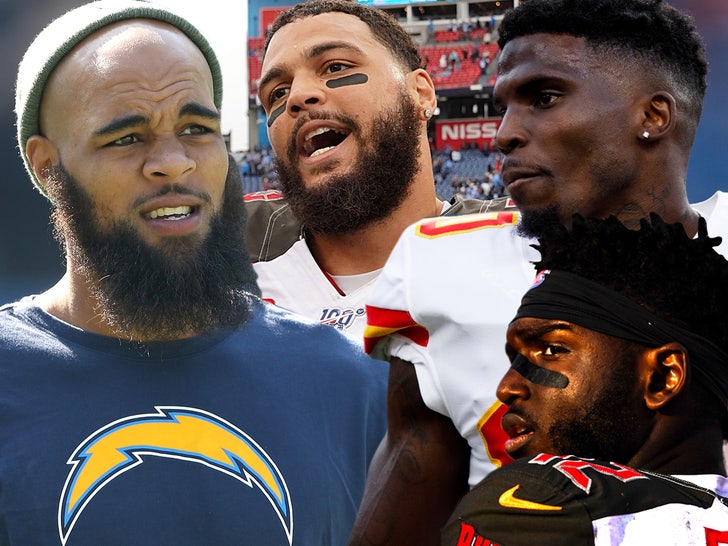 The L.A. Chargers superstar went on a late-night rant Sunday after his NFL Top 100 ranking was revealed ... and the dude took aim at Tyreek Hill, Mike Evans AND Chris Godwin over it all!!

"Ok I’m tired of biten my tongue...," Allen said. "@cheetah @MikeEvans13_ @chrisgoodwin ... ( and the list goes on) ARE NOT a better reciever than me! Faster than me...every day of the week but separation..CHILD PLEASE!"

Ok I’m tired of biten my tongue...@cheetah @MikeEvans13_ @chrisgoodwin... ( and the list goes on) ARE NOT a better reciever than me! Faster than me...every day of the week but separation..CHILD PLEASE! https://t.co/rBQwJZWkE3

Allen continued, "IM THE BEST WR IN THE AFC WEST!!! Without question!!!"

Allen came in at #77 on the annual list ... falling 39 spots from his #38 ranking last season -- and he clearly could not have been more upset about it.

"Starting to think I did something to somebody !" Allen said.

Of course, the receivers Allen threw shade at to prove his point didn't take it quietly ... Godwin and Evans both fired back -- comically clowning Allen for spelling Godwin's name wrong in the rant.

Added Evans, "You tagged the wrong Chris Godwin lol and don’t be mad at us we ain’t make the rankings or care about em. I like the confidence but be realistic you not on my level bro."

Hill has yet to weigh in on the battle ... but he did retweet Evans' comment -- clearly showing which line of the debate he's on.

If you're wondering ... the Chargers play BOTH the Buccaneers and the Chiefs this year -- with two of those meetings scheduled to go down in just a few weeks.