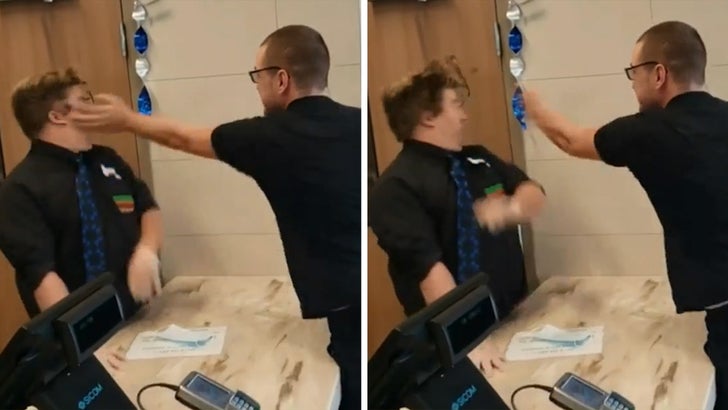 7:49 AM PT -- 8/4 We spoke with a witness who tells us Addison entered the BK enraged and looking for a female employee who he apparently knew. We're told Addison first threw his keys, and the witness attempted to cool him down -- but it didn't work -- that's when the video started. Despite speculation online, we're told the incident did not appear to be racially motivated.

5:31 PM PT -- It was previously believed Addison was fired from his job at Harbor Freight Tools for the slap, however, a rep for the company tells us that while they don't condone his actions ... Addison was no longer an employee there at the time of the incident.

This Burger King lounge is anything but chill ... a customer slapped the hell out of an employee to punctuate a rant, and the incident was caught on camera.

Here's the deal ... the video picks up with the upset customer screaming about a BK employee who "can't count except for robbery and stealing stuff." Next, the man threatens to somehow get the employee put in jail for the rest of her life.

Sounds like he was allegedly shorted on some chicken nuggets and decided it would be a good idea to yell and scream at the manager, or whoever was working the counter, without a face covering ... and make his point with a slap to the face.

The BK employee took it all in stride, and tried to warn the guy he was on camera ... but that didn't stop the slap heard around the lounge.