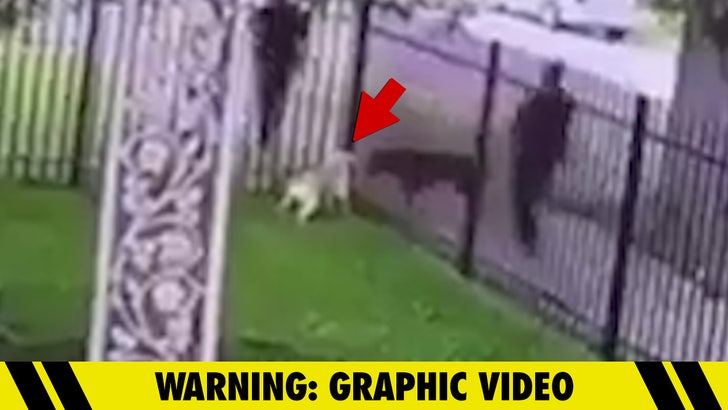 3:14 PM PT -- The Detroit PD just told us, the officer who shot the dog did nothing wrong. They say the cop was looking for a gun an armed suspect had discarded, and was with her police dog that was on a leash. Short story -- the law required the cop to control her dog and stay away from a fence where a dog was legally on the other side -- contained on its property, but she didn't and the dogs began fighting.

The PD says the only way the cop could extricate her dog from the pitbull's mouth was to shoot it. The law couldn't be clearer -- the cop -- who had her dog on a leash -- did not have control of her dog, because she should have kept it away from the fence. And, get this ... the PD is saying the fence was illegally constructed ... as if that mattered.

6:52 PM PT -- Bottom line ... this was a tragedy on all sides of the fence. The police officer's dog was badly hurt and we're told she is distraught over the whole incident. She clearly did not intend for the dogs to fight, so it's sad all around.

A police officer caught on camera shooting and killing a fenced-in dog on its own property after it tangled with her own K-9 through a gate ... and the footage is horrible.

This incident was captured on a home security cam somewhere in Detroit, and it shows a medium-sized white pooch on his property behind a fence, following a cop and her K-9 walking on the sidewalk ... until they reach the end, and the two dogs get into it.

From the looks of the clip, it appears the cop did not have control of her dog ... and its snout gets latched onto by the white one through the rails. Rather than try to pull her dog away -- or literally anything else at all -- the officer is seen pulling out a weapon of some sort and discharging it right in the white dog's face.

People online are claiming she shot it with her gun, and that the dog died. Before that, however, you can see it twitching violently on the ground as other officers surround the scene. The video cuts shortly after that.

At a bare minimum, the cop is in clear violation of the leash law ... the dog was on a leash, but the officer did not adequately control the animal by keeping it away from the fence.

A Detroit police officer shot someone’s dog that posed no threat inside its own fence after he lost control of his own K9.

This officer should be held accountable. He should be fired and prosecuted. pic.twitter.com/28D4TuiMmy

But, it's already catching national attention -- ex-Democratic presidential candidate Julian Castro is demanding answers and accountability ... as are many others.