6:28 PM PT -- The Trump administration might not hate Billie as much as everyone thought ... the Washington Post report detailing the alleged beef between the Prez and the singer is under intense scrutiny.

Some folks are saying the WaPo took the "destroying our country and everything we care about" quote out of context. It's what Billie said about Trump at the DNC, and allegedly NOT what a top Trump official said about her.

The doc actually says Billie "stated he 'is destroying our country and everything we care about'" ... according to Vice. In other words, the doc was just summing up Billie's views on Trump.

Billie Eilish is destroying the very fabric of American life ... at least that's how officials in Donald Trump's administration view the pop sensation.

Here's the deal ... a top Trump administration official put a decidedly partisan spin on a $250 million campaign it wanted to roll out weeks before the election, aiming to "defeat despair and inspire" hope amid the COVID-19 pandemic. We say it was partisan because the official reportedly ripped celebrities known to oppose the Prez.

Billie drew much of the Trump administration's scorn ... in the docs, which the Washington Post says were obtained by Democrats in the House, the Trump official described the singer as "not a Trump Supporter" and accused her of "destroying our country and everything we care about." 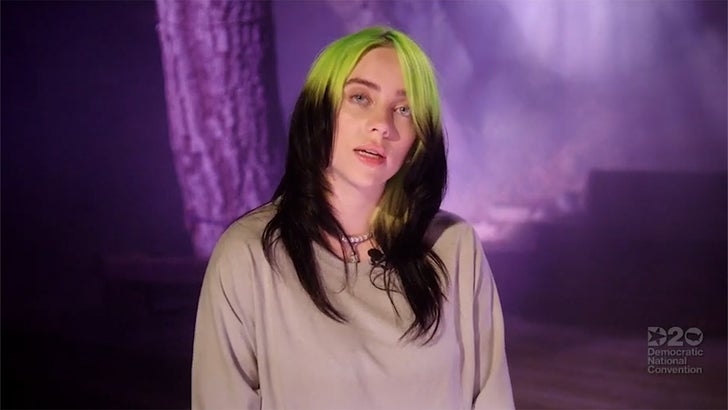 Billie's bad review makes sense ... she performed earlier this year at the Democratic National Convention, and she said the President was destroying the country. Guess her phrasing struck a chord with Trump's camp.

The ad campaign was reportedly seeking celebs to support Trump's response to the pandemic, and other famous folks like Jennifer Lopez and director Judd Apatow did not make the cut either.

J Lo famously bashed Trump's immigration policies during February's Super Bowl halftime show and officials ruled out Judd because he "believes Trump does not have the intellectual capacity to run as President."

Jack Black is reportedly referred to in the docs as a "classic Hollywood liberal" and Johnny Depp was passed over because he "appears to be aligned with the liberal left."

So, big shocker ... they found out most of Hollywood is liberal. Hope they didn't spend a ton of money on research.