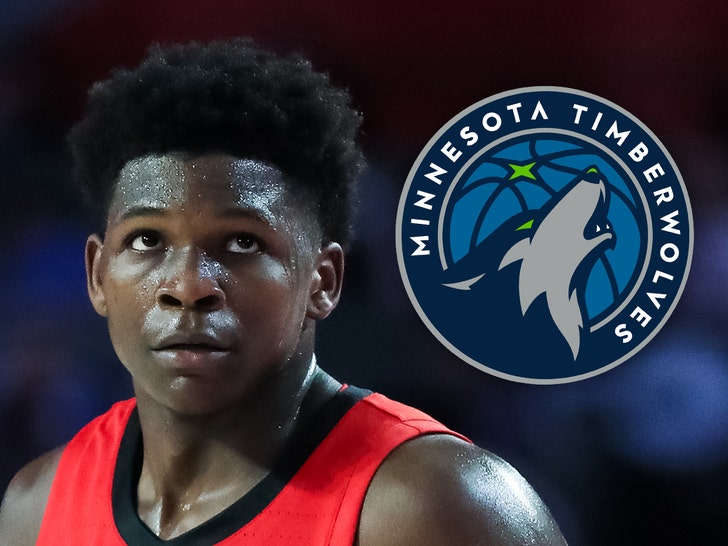 The pick is in ... and the Minnesota Timberwolves have taken Anthony Edwards with the first overall selection in the 2020 NBA Draft!!!

The 19-year-old shooting guard was the betting favorite to have his name called first ... so it shouldn't come as a big surprise.

The Atlanta native was a beast as a freshman at Georgia -- averaging 19 points and 5 rebounds a game.

Edwards was emotional after his name was called ... honoring his late grandmother and mother -- who both died from cancer in 2015 -- with portraits by his side.

Anthony Edwards celebrates going No. 1 in the #NBADraft

He has images of his late mother and grandmother, who both died of cancer, with him ❤️ pic.twitter.com/naxROsyQwb

LaMelo Ball -- hands-down the most popular player in the draft -- was taken #3 overall to the Charlotte Hornets ... after the Golden State Warriors decided to go with Memphis center James Wiseman at #2.

Of course, the big event is totally virtual this year due to the coronavirus ... but that didn't stop the draft day drip!!

As for celeb appearances, betcha didn't think you were gonna see Spike Lee at the draft ... but the film legend made a cameo when North Carolina star Cole Anthony -- Greg's son -- was drafted #15 overall by the Orlando Magic.

It may seem random, but Lee is longtime family friends with the Anthony fam ... and even though Cole didn't get drafted by Spike's Knicks, the dude lost his mind!!

Spike Lee's reaction to Cole Anthony getting drafted by the Magic is priceless 😅 pic.twitter.com/e18TDhg5Wi