Imagine going 1-for-9 for 13 yards and two interceptions ... and receiving PRAISE???

That's exactly what happened this week ... 'cause after Denver Broncos QB Kendall Hinton laid down a historically awful performance against the Saints on Sunday, some of New Orleans' stars raced to his defense to salute him for the effort.

Here's the deal if you missed it ... Denver's entire quarterback room was forced out of Sunday's tilt at Mile High due to coronavirus protocols -- which lurched Hinton into emergency QB duties.

Hinton -- who had played QB most of his college career at Wake Forest -- clearly wasn't ready for the role, especially considering he'd been nothing but a wideout since making the NFL.

The undrafted rookie amassed just 20 total yards of offense despite being under center the entire game ... and his lone completion in the 31-3 blowout only traveled a few yards in the air.

Why is this game even being played? completely not fun to watch and very unbalanced competitively.pic.twitter.com/ONQNCQ7w5M

But, instead of clowning the dude for one of the worst QB performances in the history of the league ... Cameron Jordan and Demario Davis respected the hell out of him for the game.

"He handled this situation like a real pro," Davis said. "I can only imagine the range of emotions and mental download he went through in 24 hrs. #Salute"

Added Jordan, "Helluva situation to be in... No shade at all... RESPECT breh"

For their part, the Broncos were complimentary of Hinton's game as well ... writing on their team Twitter page, "Undrafted rookie WIDE RECEIVER @Kendall_Hinton2 came off the practice squad, had zero practice reps and competed in his first NFL game as the Broncos’ QUARTERBACK—an unprecedented situation. He deserves all the respect."

The Broncos' original starter, Drew Lock, is expected to return from coronavirus protocol in time to face the K.C. Chiefs this weekend. 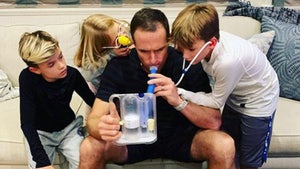