Cover your eyes if you hate seeing dogs get hurt, because this pit bull nearly had its head gnawed off by a bear before its owner courageously jumped in to save him.

Meet Buddy -- a rescue dog -- who was viciously attacked in his own backyard by a 350-lb bear the day before Thanksgiving in the Northern California city of Grass Valley, just outside the Tahoe National Forest, and not too far from Sacramento.

According to Buddy's owner, Kaleb Bentham, he heard commotion outside that Wednesday and some growling. When he went out to check, he says he saw a massive bear dragging Buddy away by the head, with its jaws clamped down tight and Buddy squirming. 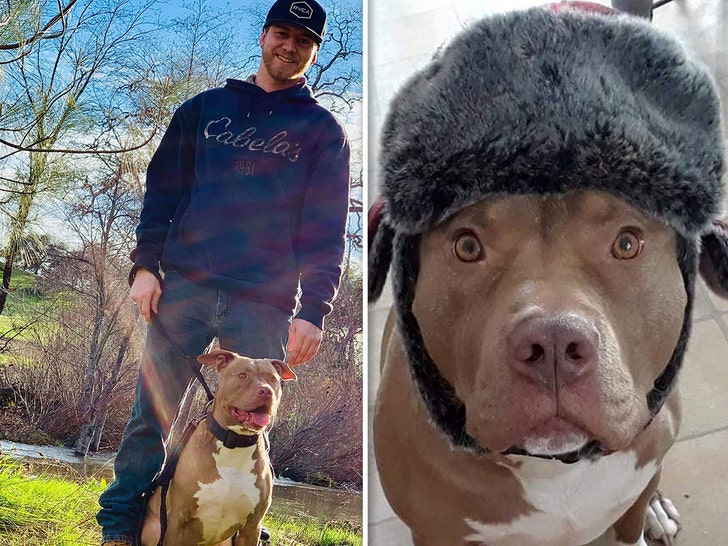 Without hesitation, Bentham says he charged the beast and actually tackled it to the ground -- going on to start wailing on its head, and hitting it in the eye ... in hopes of forcing it to loosen its grip on Buddy. Miraculously, the bold move worked ... and the bear let go.

Not only that, but it sounds like Kaleb was able to scare the animal off without suffering any harm himself. He then had to rush a seriously injured Buddy to an ER vet clinic -- as you can see ... the doggo was in incredibly bad shape, on the verge of death even.

Buddy’s face was severely damaged. His ears had to be stapled back on. But he’s recovering! Kaleb and Buddy spent Thanksgiving laying in bed resting, but they’re more thankful than ever. Photo of Buddy as Kaleb watched from outside the operating room ⬇️ pic.twitter.com/T8IhDjkvLs

Buddy's face was damn near skinned, his ears were torn off, his mouth had been bitten through and so had his eyes. Bentham stood by as the pooch went into surgery -- a life-saving procedure that saw Buddy receive multiple staples, stitches and tubes.

While it might look like Buddy was out for the count, the dog has made an incredible recovery since then ... with a majority of his face starting to scab, as Bentham continues to care for him. He detailed the pup's full injuries to CBS 13 in Sacramento.

A man’s love for man’s best friend is a powerful force. Kaleb Benham from Grass Valley took on a 350 pound bear that was attacking his rescue dog, “Buddy.” Kaleb said he heard a growl the saw the bear dragging buddy “by his head.” So he tackled the bear and punched it pic.twitter.com/XAhTrS2AEC

Buddy's got a cone on his head, but it sounds like he's gonna be okay.

Here's the kicker ... Bentham says he's actually seen the bear roaming his yard a few different times since the attack. In his eyes, he sees it as a wild animal having had its meal literally ripped out of its mouth, and that it keeps coming back to settle the score.

Might be time to start putting up a fence, or keeping Buddy indoors from now on 😬. 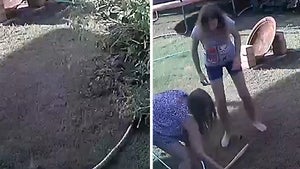 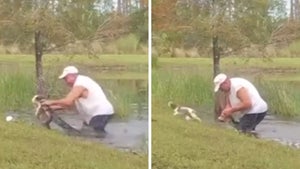