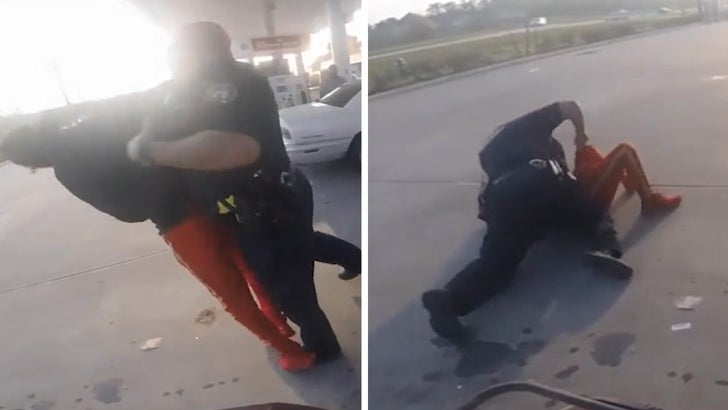 A sheriff's deputy in Texas is under investigation after he was captured on camera threatening to beat the crap out of a teen ... and then actually did punch him in the face.

The disturbing incident went down last Friday in Harris County where a 16-year-old named Carlos and his buddy had just pulled into a gas station on their ATVs. The deputy beelined it for Carlos and asked him for ID, and things went south real quick.

You can see in the video, shot by Carlos' friend, the deputy initially tells Carlos to turn around put his hands behind his back. He started to do that, but took one step away, prompting the deputy to grab him and yell, "Don't run from me boy, I will beat your (expletive) right here."

Carlos appears to panic at that point and the deputy barks out, "Turn around and put your hands behind your back before I beat the (expletive) out of you. Don't be (expletive) stupid."

And, then ... bam, the deputy squarely punches Carlos in the head, knocking him to the ground. The deputy didn't let up either ... you can see him unload a few more punches while they're both on the ground. He eventually arrested Carlos for evading arrest.

Carlos told KTRK-TV he and his friends may have previously driven away from deputies -- you hear the cop reference that -- but adds, he didn't think getting gas would lead to a violent encounter with law enforcement.

We reached out to the Harris County Sheriff's Office and a spokesperson tells TMZ ... it's aware of the incident "in which one of our deputies used physical force and unprofessional language against a suspect at a convenience store." We're told the incident is under internal investigation, and the deputy's been placed on administrative duty. 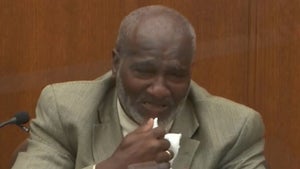