Best moment of the WNBA Draft?!?!?

How about when Michaela Onyenwere was selected in the 1st round on Thursday night ... and her grandma was so fired up, she busted out the dance moves to celebrate!?!?!

Talk about a MOOD!!!

21-year-old Onyenwere was a star forward at UCLA -- and when the NY Liberty had the shot to take her with the 6th overall pick, they JUMPED!!

And, when Michaela's name was called, her grandmother -- decked out in an amazing festive outfit -- leaped out of her seat and yelled, "I'm grandma!"

The rest of the family smiled and clapped along -- it was awesome!

The other top moment from the WNBA Draft featured Tennessee star Rennia Davis.

ESPN had Davis lined up for a live interview after the Minnesota Lynx selected her with the 9th overall pick ... but Davis was so hyped watching her college highlight package, she forgot there was a camera on her!

Davis was literally shouting at the TV in her home while watching herself ball out -- pretty epic moment!!

As for the #1 overall pick, the Dallas Wings selected Charli Collier -- a 6'5" superstar from Texas with tons of potential.

21-year-old Collier averaged 19 points and 11 rebounds per game during her junior year with the Longhorns -- shooting just over 51% from the field.

Congrats to all the new pros! 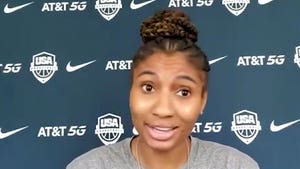 WNBA's Angel McCoughtry Claps Back at Draymond Green, 'Do Your Research' 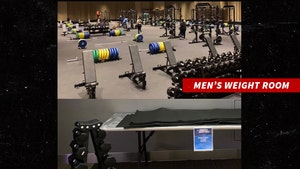