How's this for an epic summer pool party?!?!

Katie Ledecky and Simone Manuel -- two of the best swimmers on the planet -- needed a pool so badly to train for the Olympics during the early goings of the pandemic in 2020 ... they straight-up went to a man's backyard for help!!

The story is pretty wild ... Ledecky and Manuel, who normally get their laps in at Stanford's facilities, found themselves pool-less in March '20 after the school closed due to coronavirus.

The two REALLY needed water, their coach, Greg Meehan, told Yahoo Sports this week ... 'cause the Tokyo Olympics had yet to be postponed, and trials were just weeks away.

"We were scrambling to find any water because the reality was the trials were going to be in about 12, 13, weeks,” said Meehan, who also coaches the Stanford women’s swim team.

"If we get stuck without being in water for a month or six weeks or something, it’s just not going to go well. I had thought a lot about what happens if we don’t find water. I was trying connections everywhere."

Enter Tod Spieker -- a swim legend who was an All-American at UCLA and a backstroker at the 1968 Olympic Trials -- who just so happened to have a great pool to offer up.

Meehan contacted Spieker -- who he knew through mutual friends -- about using the water ... and Tod told him no problem.

So, everyone rolled up to Spieker's house ... and stayed training there for months!

Meehan said the setup was incredible, given the circumstances -- it was equipped with clocks, starting blocks and backstroke flags -- and the two Olympians put in WORK there until their regular facilities opened back up in June.

"It wasn’t three months of the greatest training of their life," Meehan said, "but it was enough to keep the engine running."

Imagine ... a backyard pool really might have just paved the way for a ton of Olympic gold this summer!! 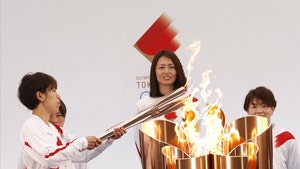