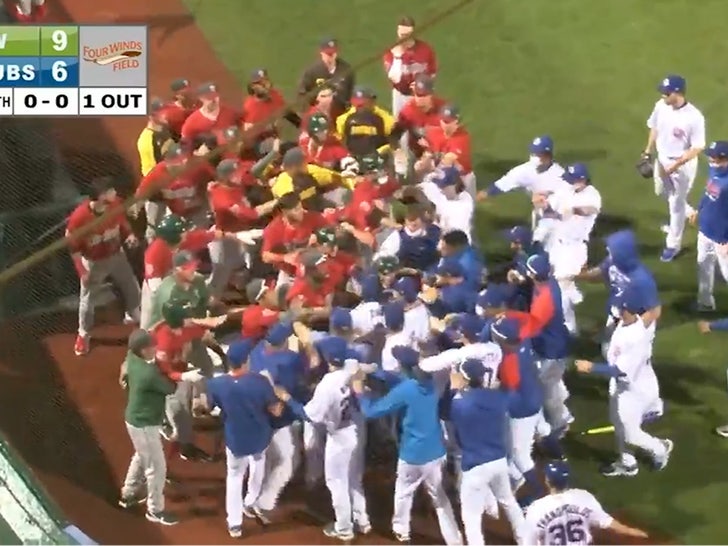 All hell broke loose in a minor league baseball game Tuesday night ... with players throwing violent haymakers at each other during an insane brawl that was all captured on video.

The melee went down in the 8th inning of a game between Chicago Cubs and San Diego Padres minor leaguers in South Bend, Ind.

The Fort Wayne Tin Caps and South Bend Cubs got in an action-packed brawl tonight pic.twitter.com/TUhAKHueL9

Video from the broadcast shows all of the action initially began in the 7th inning ... when Cubs shortstop Delvin Zinn got into a heated argument with the TinCaps' bench.

You can see in footage from the game's broadcast, Zinn was clearly enraged by something TinCaps players had said ... and he needed to be held back by teammates.

Fast-forward just a few minutes later in the 8th inning, when a violent fracas broke out after a TinCaps player had struck out.

Check out the clip, the Cubs' catcher said something to the Ft. Wayne player after the pitch ... and then EVERYBODY rushed the field!!!

The benches cleared, and multiple punches were thrown and landed for several seconds.

Eventually, it was all broken up ... and according to the game's box score, FOUR players were ejected by umps immediately.

The two teams are set to play FIVE more times this week ... and even if suspensions are handed down -- more drama could unfold.