Ronnie Ortiz-Magro's ex was taken into custody in Vegas Saturday night and booked for domestic battery and assault with a deadly weapon.

She remains in custody at the Clark County Detention Center. Bond was set at 5k. A court hearing is set for later today.

Jenn and Ronnie have had a violent post-breakup relationship, complicated by the fact they have a child together.

Authorities are not saying who the alleged victim is, however, they are co-owners of a home in the area.

Both Jenn and Ronnie have been arrested for allegedly engaging in violence toward each other. Jenn was taken into custody in 2019 after she allegedly threw a glass ashtray at Ronnie.

He was arrested this past April for domestic violence, and he was already on probation. However, he was not charged for the incident.

Ronnie was arrested for kidnapping back in October 2019 after allegedly striking Jenn, wielding a knife, taking their daughter from her and then locking himself inside an Airbnb they were renting in L.A.

When cops arrived, Ronnie allegedly refused to come out so they had to bust in and tase him before placing him under arrest.

Harley allegedly suffered bruises and scrapes in the altercation, and a neighbor's surveillance footage shows her looking scared as she held Ariana and hid behind a car.

He struck a plea deal and avoided jail time for this.

It's a sad and dangerous situation for the entire family, especially for their 3-year-old daughter, Ariana. 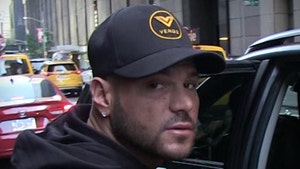