Dolly Parton threw down major dough she collected off the success of one of Whitney Houston's biggest hits -- a rendition of Dolly's, no doubt -- into a Black Tennessee community ... something that doesn't appear to have been known, until now.

The singer made the revelation this week during an appearance on 'WWHL' with Andy Cohen, where he asked her ... what was the best thing she'd invested in with the royalties she's collected from Whitney's version of 'I Will Always Love You' ... originally sung by DP.

Dolly gave a pretty incredible answer ... as it appears it's something no one's ever bothered to ask, but she was happy to share. Check out her response for yourself in the clip.

She tells Andy that of the money she'd gotten from the royalties -- a reported $10 million or so, in the '90s -- she ended up investing a decent amount into an office complex/strip mall "off the beaten path" of 16th Avenue in Nashville (a famous street near downtown).

More importantly, Dolly notes it was a part of town where mostly Black folks lived -- and she felt there was no better place to be, as it was among Whitney's people ... and Dolly's people, too, as she points out. It's unclear if Dolly developed more down there over the years ... but in any case, she almost certainly left some sort of economical impact big picture with her outlay.

It's unclear where exactly Dolly's property resides ... but it sounds like she still might be using it all these years later. And, crazier yet -- she never really piped up about this until Andy asked her about it, it seems. As many are pointing out -- that's just Dolly for ya.

One more thing worth mentioning re Whitney and Dolly -- during a Q&A segment from fans, one person asked if there were ever plans for Dolly to perform 'I Will Always' alongside Whitney, like in a duet version or something ... and it just never happened. Very good question, as Andy notes.

Her answer is both stunning, and kinda annoying ... if you're a fan of either artist.

Long story short, Dolly simply says ... no, because NO ONE EVER ASKED HER TO DO IT, even though she adds she would've happily agreed to belt out the tune next to Whitney, assuming anyone approached her about it. Talk about a missed opportunity, huh???

As for how she thinks she would've held up against WH's legendary pipes ... that's telling too. Dolly is as graceful as ever here. 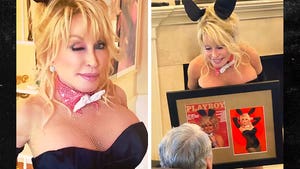