5:05 PM PT -- Bauer's attorneys, Shawn Holley and Jon Fetterolf, are responding to the photo ... telling us, "Unlike Mr. Freedman and the woman’s legal team, we are not interested in trying a restraining order petition through the media. Relevant and previously omitted messages from the woman were attached as an exhibit to a routine motion to strike a so-called expert the Petitioner has proposed to testify on the issue of consent."

The statement continues, "While Mr. Bauer has stated from the outset that the two encounters he had with this woman were wholly consensual, he unequivocally denies the allegations in her affidavit regarding both of their encounters. The woman’s statements are highly inaccurate and not reflective of what occurred during their two meetings, as the woman’s own text messages with Mr. Bauer and others clearly attest."

Bauer's legal team is also accusing Freedman of violating a court order by releasing a photo "the court previously ruled was to remain private. They have since retracted that photo and circulated one that is inconsistent with other photographic evidence in the case."

11:50 AM PT -- The attorney for Bauer's alleged victim, Bryan Freedman, asked TMZ Sports to publish an unredacted photograph showing his client's alleged injuries ... saying the damage could NOT possibly be part of a consensual encounter.

"Look at this picture. No one -- absolutely no one -- can consent to this, logically or legally. Trevor Bauer’s team continues to try to abuse an assault victim. They need to stop. Now."

The alleged victim and her family requested this photo be released, per Freedman.

Trevor Bauer says he has proof his accuser admitted in writing that at least one of their sexual encounters was "consensual."

The L.A. Dodgers star made the claims in a new court filing this week ... saying he and his reps have obtained text messages between his accuser and her cousin that show she admitted that at least one night of Bauer's rough sexual acts were consensual.

In the text message exchange ... which Bauer claims went down on May 16 -- the morning after the second of their two sexual encounters -- the Dodgers star says the woman was having a conversation with her cousin about having sex with the pitcher. 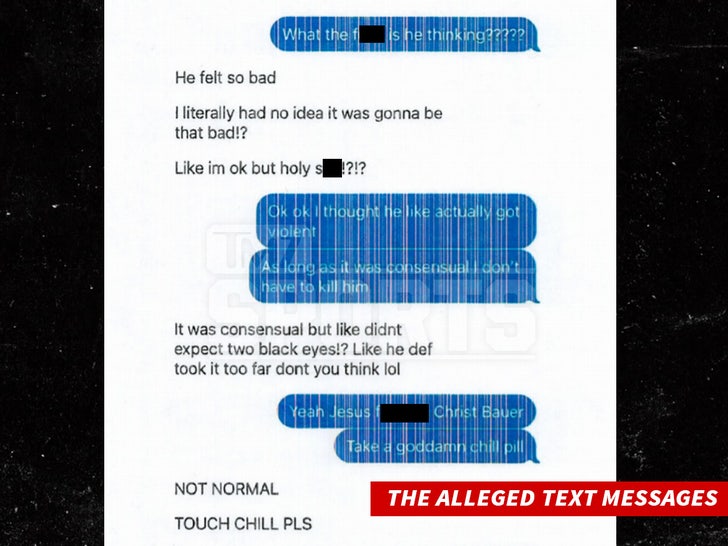 "How you doing there dude," Bauer claims the cousin asked.

When asked what happened, in the document Bauer says the woman showed her cousin a picture of her bruised and swollen face, adding, "He felt so bad. I literally had no idea it was gonna be that bad!? Like im ok but holy sh*t!?!?"

Bauer says the cousin responded, "Ok ok I thought he actually got violent. As long as it was consensual I don't have to kill him."

The woman, according to Bauer, said, "It was consensual but like didnt expect two black eyes!? Like he def took it too far dont you think lol."

In the docs, Bauer and his attorneys claim the messages help prove the MLB player did not sexually assault the woman.

The accuser's attorney, though, is calling B.S. on it all ... with Bryan Freedman saying in a statement to the L.A. Times, "Mr. Bauer’s defense team is deliberately twisting the tone of text messages exchanged with an assault victim within hours of her being attacked to try to minimize the long-lasting impact on her physical and mental well-being to this day.”

Police have said they are investigating Bauer -- who's currently on administrative leave from the Dodgers.

Further court hearings, meanwhile, to determine if a permanent restraining order against Bauer should be put in place are slated to continue later this month. 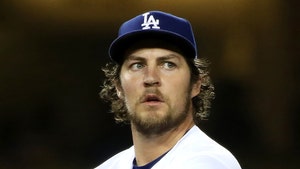