The assistant director on the set of "Rust" who told Alec Baldwin the prop gun he was about to fire was safe has allowed an unsafe working environment on previous productions ... this according to someone who worked with him on a previous production.

Propmaker Maggie Goll worked with A.D. Dave Halls in 2019 on Hulu's "Into the Dark" series. She says, "At first he seemed like an older, affable first [A.D.] with the usual run of idiosyncrasies, but that facade soon disappeared," adding, "He did not maintain a safe working environment."

"He did not maintain a safe working environment," Goll said in a statement to NBC News. "Sets were almost always allowed to become increasingly claustrophobic, no established fire lanes, exits blocked ... safety meetings were nonexistent."

Goll says in one case Halls continued to let cameras roll in the middle of a medical emergency -- when something happened to the pyrotechnician -- and she says that created a dangerous situation.

Perhaps most alarming ... she says Halls didn't hold safety meetings when a gun was used on the set.

Halls is the one who gave Baldwin the prop gun and yelled, "cold gun" ... meaning it had no live rounds. Apparently that was a fatal error. 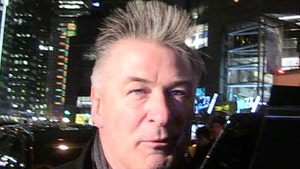