Carl Nassib -- the NFL's only openly gay player -- will be showing his support for the LGBTQ+ community on Sunday ... by wearing a pair of custom rainbow cleats.

The Raiders pass rusher -- who came out as gay earlier this year -- revealed the unique footwear this week ... announcing he'd be sporting the shoes for Las Vegas' matchup with the Washington Football Team.

If you're unfamiliar, the NFL is allowing teams to rock custom cleats in Week 13 to raise awareness and money for causes close to the players' hearts ... and Nassib is choosing to wear a pair with a rainbow design on them. 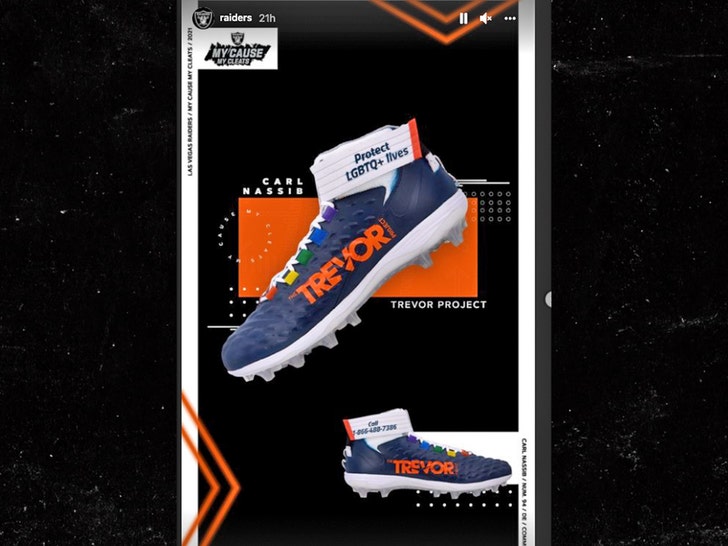 Nassib's cleats will also feature the words "The Trevor Project" in bold orange on the sides -- with "Protect LGBTQ+ lives" written on them as well.

FYI -- The Trevor Project is the world's largest suicide prevention and crisis intervention organization for LGBTQ young people ... and it's a cause Nassib has had strong ties to ever since he came out back in June.

Nassib famously pledged to donate $100,000 to the org. after his announcement ... and he urged others to chip in as well.

Nassib officially became the first openly gay player to ever play in a regular season NFL game back in September ... and he's gone on to have a solid year, logging 1.5 sacks and 18 tackles.