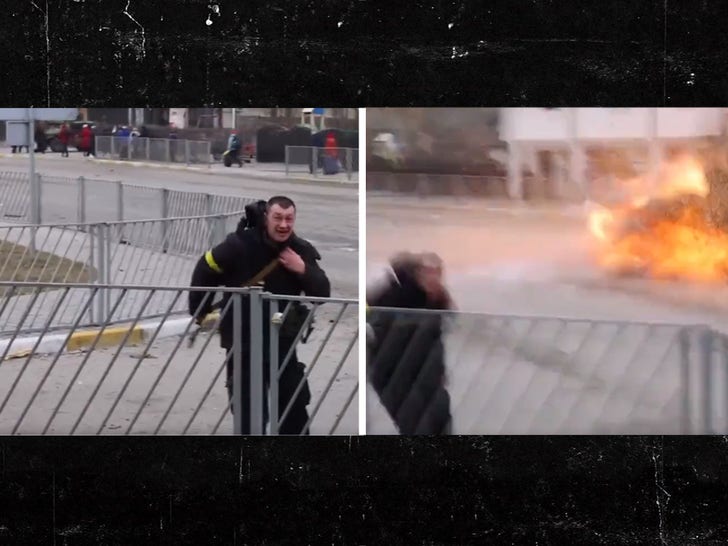 Reports of civilian casualties in Ukraine are piling up, and now ... video footage appears to back up claims that Putin's Russian army is killing anybody and everybody it come across.

This clip was reportedly shot Sunday morning as Ukrainians were attempting to evacuate ordinary citizens out of the city of Iprin, just outside of Kyiv ... when, all of a sudden, they were fired upon by explosive shelling near an exit route along a bridge there.

Irpin bridge amid civilian evacuation fired at by Russia.

Ukrainian Territorial Defense soldier moments before the blast says “everything is bad, yesterday we evacuated kids, bodies of civilians.”pic.twitter.com/KwxizG6N1g

You can see what appears to a Ukrainian soldier standing near some barricades, talking to people hiding behind a building not too far from him. You can also see some people shuffling along in the open streets behind him.

All seems calm, until seconds later ... when when what appears to be a mortar shell and/or a missile flies past him and explodes mere feet away, sending the man flying back.

Irpin is under attack. Citizens are trying to reach buses on the outskirts of the city to flee to Kyiv.

Moments later, you can see a few bodies laid out in the distance with others rushing over to attend to them, calling for a medic. According to the NYT, at least 4 people were killed in this specific incident ... including civilians.

The place is being torn to shreds, and it looks like the Russians aren't letting anyone escape with ease -- especially if they're firing shell after shell toward the evacuation process ... and killing whoever may be unfortunate enough to be in their path.

Man films some of the refugees killed today during the shelling of Irpin while people were trying to evacuate.

The victims, a father and his children still have their roll-aboards next to their bodies.

A church nearby is still on fire.

Frankly, this is just a fraction of the footage that's out there showing civilians being targeted by the Russians ... so, it's clear they're not discriminating as they continue to invade.

The question that then poses is ... what is the U.S. going to do about it, if anything???

Secretary of State Antony Blinken tells CNN's @jaketapper the US is investigating and documenting reports of Russian attacks on Ukrainian civilians that could constitute war crimes. #CNNSOTU pic.twitter.com/yEP2NeFw0W

That was asked of Sec. of State Anthony Blinken by CNN's Jake Tapper this weekend -- and while Blinken acknowledged U.S. officials had, in fact, seen credible reports of civilians being wiped out such as in the instance depicted here ... all he said is they were documenting it.

Now, he did suggest that cutting off Russian oil and further sanctions could be in play soon in response to all this -- but it sounds like the administration still doesn't want to get directly involved with combat troops ... and probably for good reason. That'd lead to WWIII.