Peanut butter and jelly collaborators Rico Nasty and Kenny Beats first met back in 2018 … and history now shows it was their destiny to be a platinum pairing!!!

The Recording Industry Association of America has been rolling out plaques to artists all week and Rico and Kenny’s rager single “Smack a B*tch” was awarded a platinum honor.

We made this song the first day we ever met 😭 https://t.co/DN44SVhkAV

While reacting to the news, Kenny revealed the song was made on their very first encounter … evidence that some artists just have instant chemistry!!!

The two would go on to collaborate for the 2019 mixtape “Anger Management” and a “Smack a B*tch Remix” -- featuring Rubi Rose, Sukihana and ppcocaine -- would wind up on Rico’s 2020 album, “Nightmare Vacation.”

Rico jumped on IG Thursday to trade insults with trolls. Maybe she’ll share her side once she cools off!!! 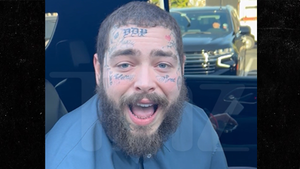