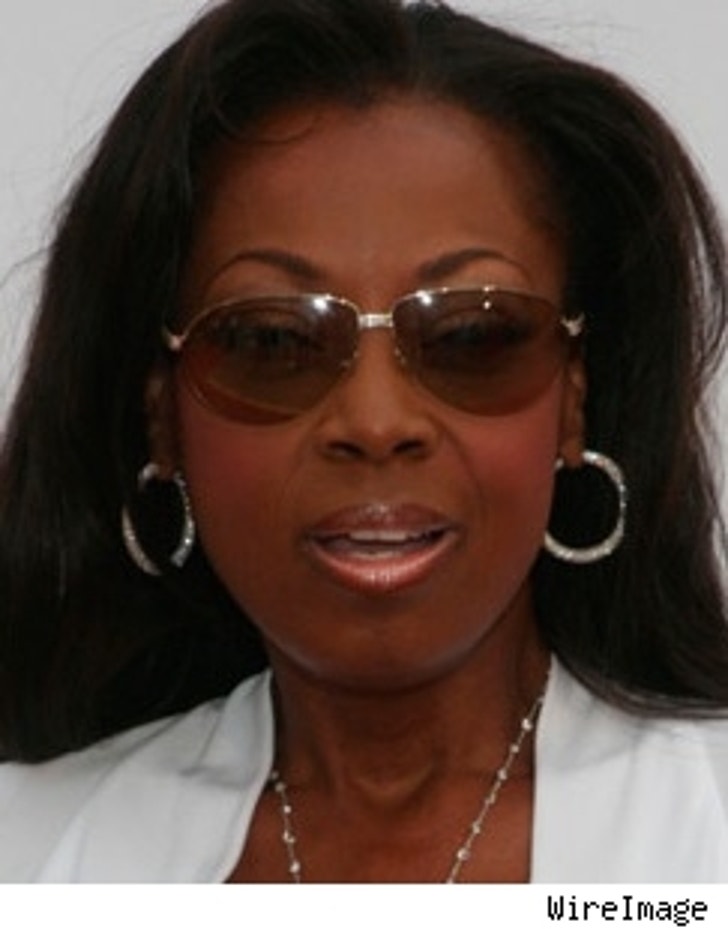 Looks like the folks at "The View" knew what they were doing: The recently-fired Star Jones is the most unfavorably-viewed TV personality in America, based on a Gallup poll released yesterday.

Of course, newly hired "View"-er Rosie O'Donnell didn't fare much better, nearly matching Star's negative rating. But the news isn't all bad for ABC -- Diane Sawyer is the most beloved personality of all, according to the poll's respondents.

In fact, according to Gallup, 88 percent of the 1001 people polled gave Sawyer a "favorable" rating, and 87 percent saw her former co-host and now-anchor of ABC's "World News" Charles Gibson as "favorable" as well. The beleaguered Star, on the other hand, racked up a 70 percent "unfavorable" rating, with Rosie only just ahead of Star with a 65 percent negative tally.

Still, despite the polling numbers, "Good Morning America" doesn't beat "Today" in the ratings race. "Having a high favorability does not necessarily predict high ratings," says Gallup editor-in-chief Frank Newport. It should also be noted that such TV heavyweights as Oprah and Kelly Ripa weren't amongst the possible choices for respondents. 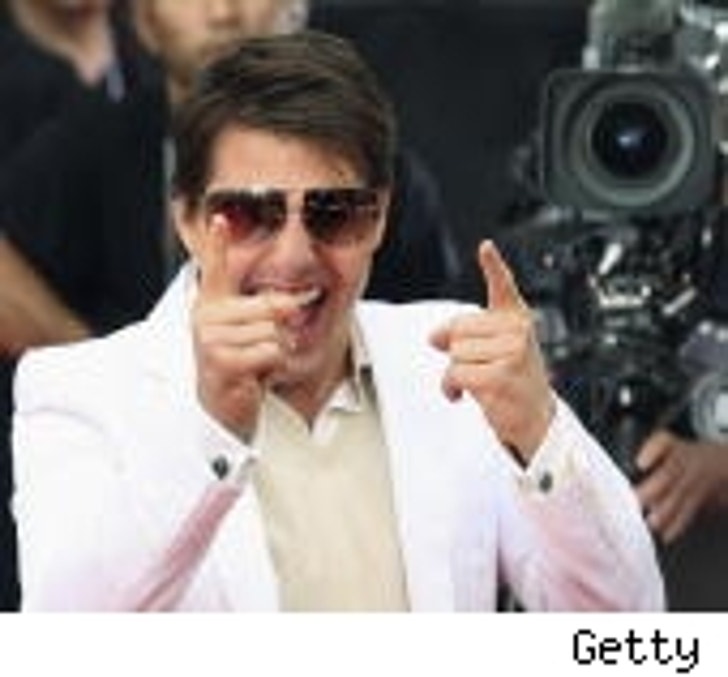 Will Suri Emerge in the Pages of Vanity Fair?

A report in today's Page Six says that Graydon Carter has struck again and that Vanity Fair magazine has nabbed the coveted first snaps of Tom Cruise and Katie Holmes' baby girl Suri, who's now almost three-and-a-half months old. The pictures, according to the Page Six source, were shot by legendary photographer Annie Leibovitz and will appear sometime in the fall, though there's no word on when the photo shoot might have taken place. Neither Cruise's nor the magazine's reps had any comment.

The news comes on the heels of a Cruise spokesman's insistence that the couple isn't "reluctant" to show off their baby, and will be "making a decision to release the photographs shortly." And just last week, Penelope Cruz became the latest celebrity witness to the child's existence, though she quickly clammed up about it when questioned about it later. 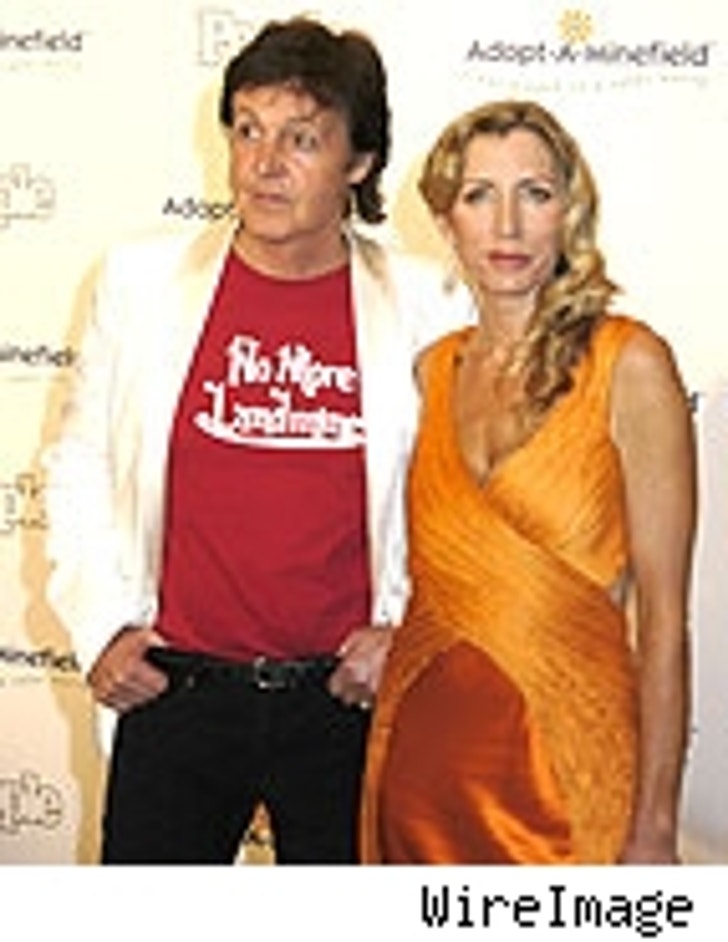 McCartney and Mills Lawyer Up – With Charles and Di's Attorneys

The suddenly very acidic divorce struggle between Sir Paul McCartney and his wife of four years, Heather Mills McCartney, took an interesting twist on Tuesday, when, according to reports, Mills McCartney hired Anthony Julius, the lawyer who represented Diana, Princess of Wales, in her own split with Prince Charles ten years ago. What's more, Charles' legal counsel in that matter – Fiona Shackelton – will be taking on Sir Paul's case. Julius won an approximately $3 million settlement for the Princess in that case.

The lawyer arms race is only the latest development in the McCartney-Mills divorce saga: Yesterday, Heather went to her husband's home, only to find herself locked out, a circumstance which her spokesman said she found "hilarious."

Onscreen king of kvetch Larry David just couldn't contain himself at a Martha's Vineyard parking lot last weekend when an errant shopping cart scratched his beloved BMW 530. According to Page Six, the "Curb Your Enthusiasm" and "Seinfeld" creator and his wife were outside a Vineyard Haven supermarket when a runaway cart made what one eyewitness said was "a little dent" in David's $75,000 car.

David proceeded to call the cops and started, says the witness, "in a golf shirt and shorts, flapping away with his arms. It was just like an episode on his show." Vineyard cops confimed that David called them but no charges were pressed. David's reps had no comment. But David doth protest too much: HBO confirmed yesterday, according to the Hollywood Reporter, that the sixth season of "Curb" will begin production as early as September, with all the principals back, and an airdate coming in 2007.

Former President Bill Clinton is having an entire buffet of festivities for his 60th birthday on August 17th, says Page Six, with the topper being a private concert by the Rolling Stones at New York's Beacon Theater more than two months later, on October 29, which will be filmed by Martin Scorsese. Clinton will also have a birthday party in Toronto during the film festival there in September, with Sarah McLachlan and Lenny Kravitz performing. . . Kevin Federline has changed his MySpace handle from the somewhat unwieldy "kevinfederlineforreal" to the more conventional "kevinfederline," says Lloyd Grove, though someone has hijacked his former user name and page. . . Opie's havin' a grandbaby! "Lady in the Water" star Bryce Dallas Howard, whose dad is director Ron Howard, announced Tuesday to People magazine that she's expecting her first child with actor-husband Seth Bagel. The couple married in June and has been together five years. . . And, finally, in news that will cheer Olivia Newton-John fans the world over, there is a report today in the New York Post that the 1980 super-classic "Xanadu" might be getting the off-Broadway treatment. Former "Ally McBeal" co-star Jane Krakowski has been cast, and investors are looking for a fall debut.