Good Charlotte have unveiled the first single of their as-yet-unnamed new album, and its title is the not-so-subtle "Keep Your Hands Off My Girl." Which makes us wonder: Is it a warning to potential Duff-admirers or a revelation of things not going so well in the oft-buzzed-about on-again, off-again relationship of Joel Madden, lead singer for Good Charlotte, and his galpal, Hilary Duff.

It's almost two years since the rockers have released any new material and "Keep Your Hands Off My Girl" begs the question of who this "girl" might be? Madden and Duff's relationship has been a tabloid focal point over the past year and the lyrics provide a rather odd clue. "I got a model 26 but she stays in the place," sings Madden, but Duff is only 18. If it's for other male admirers of his Disney darling, Madden and the band have the following admonition: "I got brass knuckles hanging from my neck and my chain," especially given Duff's suggestion that "[Madden]'s from a pretty ghetto place in Maryland."

The boys only hope that they don't have the same problem at radio as Miss Duff. The full album is due out in early 2007. 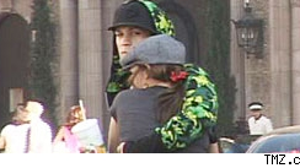