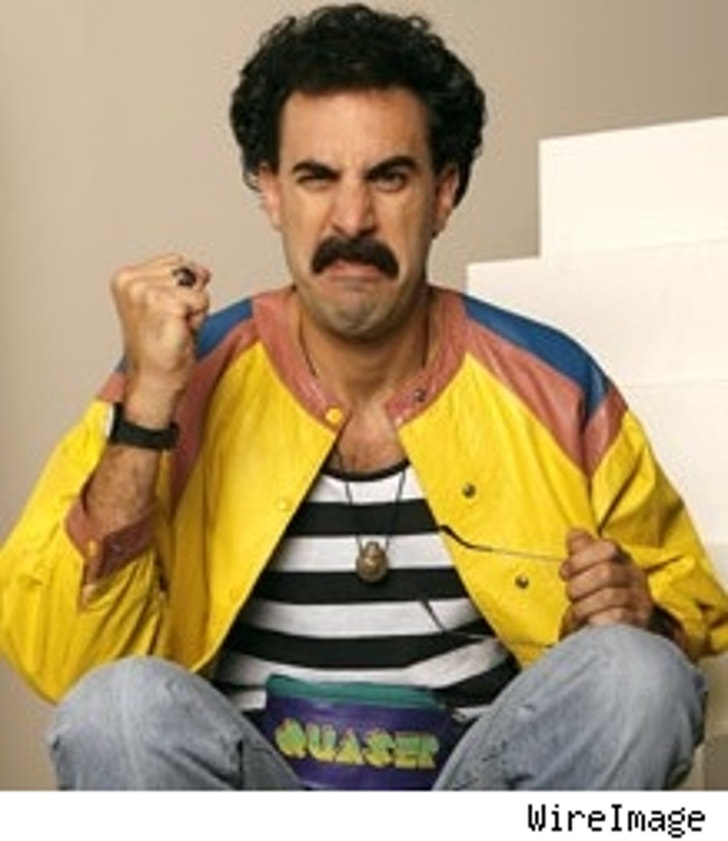 A Jewish organization in the UK says it has had enough of Sacha Baron Cohen's meshuggah Borat act, and is punishing the British-born comic with a £9.000 ($17,000) fine and a ban of six months from any UK synagogue. Or at least that's what it says.

Just as Jews worldwide gathered to observe Yom Kippur, the solemn day of atonement, The Board of Guardians of British Jews made this scathing proclamation on its Web site, www.theboard.co.uk: "We gave Mr Baron Cohen an informal warning over six months ago about the Borat character ... bringing major embarrassment to the Jewish community," says one Harry Greenberg, president of The Board. "Mr Baron Cohen ignored our letters and phonecalls [sic] ... and has been banned from setting foot into any synagogue for six months." Cohen's fake-Kazakh character continually talks about himself and his countrymen abusing and demeaning Jews, jokes that the American Anti-Defamation League and the Kazakh government have rebuked.

Of course, the so-called British Guardians' threats and edicts might be much ado about bubkes. The same organization -- which is not to be confused with The Board of Deputies of British Jews, which is the UK equivalent of the Anti-Defamation League -- put up a posting just after Mel Gibson's DUI arrest and subsequent anti-Semitic tirade in August saying that it had welcomed Gibson to its board as a vice-president, and that, "despite American media trying to imply his is anti-Semitic, Mel is a true lover of all Jews and the Jewish faith." We all know how grounded in reality that is.

Due to Yom Kippur, all parties involved were unavailable for comment or verification.