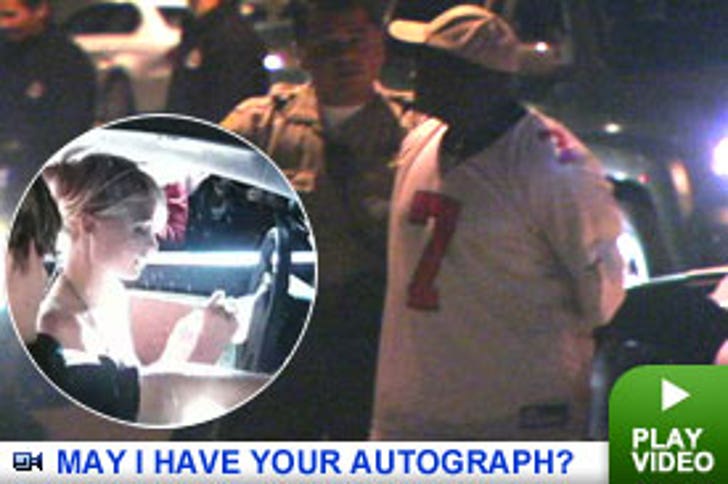 Paris Hilton had a guest at her table for dinner last night. Problem was, he wasn't invited. Cops quickly sprung into action in front of exclusive Koi restaurant in Hollywood last night after an overzealous fan entered the joint, bypassed the host stand and hit up Hilton for an autograph. Photographers and autograph seekers are told on a regular basis to respect the boundaries of the popular sushi joint by not entering the premises.

TMZ cameras rolled as the gentleman was cuffed and detained by deputies from the Los Angeles County Sheriff's Department. Moments later, Paris made her exit with a unidentified male companion.

Professional autograph seekers, or "pen paparazzi," often hang outside the Hollywood hotspot, hoping to retrieve autographs from the many celebrities who frequent the restaurant. A signature from an A-list star is often sold for a serious profit on the Internet.

TMZ spoke to the Sheriff's Department who confirmed that they were called on a disturbance at the restaurant and a person was detained. They then say they passed him to the LAPD, but LAPD tells TMZ they have no record of an arrest.