Hulk Hogan makes it pretty clear on his show "Hogan Knows Best," that he refuses to let his only daughter flaunt her sexy figure in order to sell records. So why don't we ever see her clothed anymore?

It appears that all the talking was just for show. Brooke has been making numerous publicity rounds with lots of flesh -- most notably wearing next to nothing on her recent cover of notorious man mag, FHM. The reality TV singer has also been walking red carpets in barely-there outfits. In a recent appearance on MTV, The Little Hulk wore a Britney Spears-inspired schoolgirl outfit ... just after dad kvetched about manager Larry Rudolph, not wanting him using Brookie's sex appeal like he did with former client Britney. Who's zoomin' who?!

To top it all off, Brooke's new CD cover features her in a revealing bathing suit -- yah, that's more demure. Uh huh. 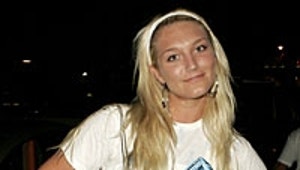