When asked about the highly anticipated "Sex and the City" movie on Monday, Kristin Davis was tight-lipped and stuck to her script. C'mon Charlotte, it's been three years!!

While surrounded by paparazzi outside Mr. Chow in Beverly Hills, everyone's favorite uptight Park Avenue princess revealed that as far as the SATC movie is concerned, "We're very excited about the possibility. That's what I'm supposed to say." For the love of Manolo Blahnik!

Kristin, Sarah Jessica Parker, Cynthia Nixon AND Kim Cattrall are reportedly all reprising their "Sex" roles for a big screen version of the hit HBO series. Because, seriously, is there anyone who doesn't want to pay $10 to see four 40-something women parade around Manhattan like 22-year-olds?! 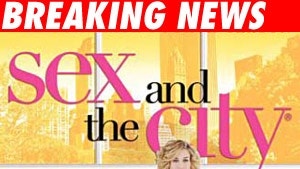