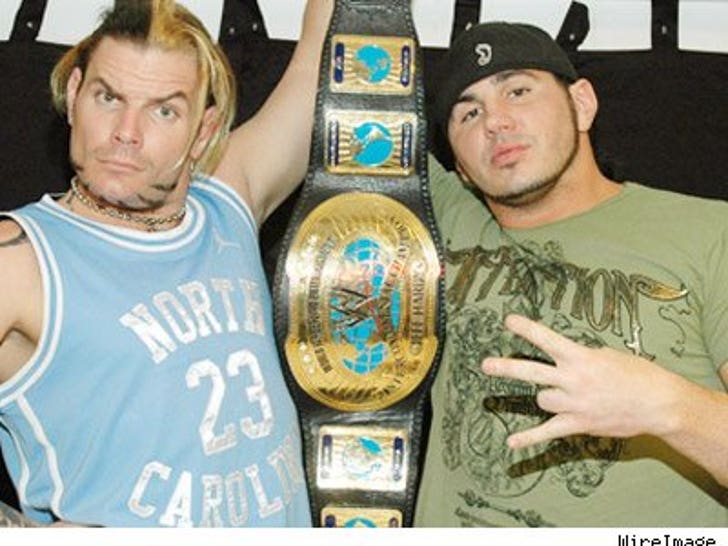 Wrestler Jeff Hardy's house burned down last weekend -- and his brother and wrestling partner, Matt Hardy, was the first person at the scene of the blaze. He blogged about the experience on his MySpace page. 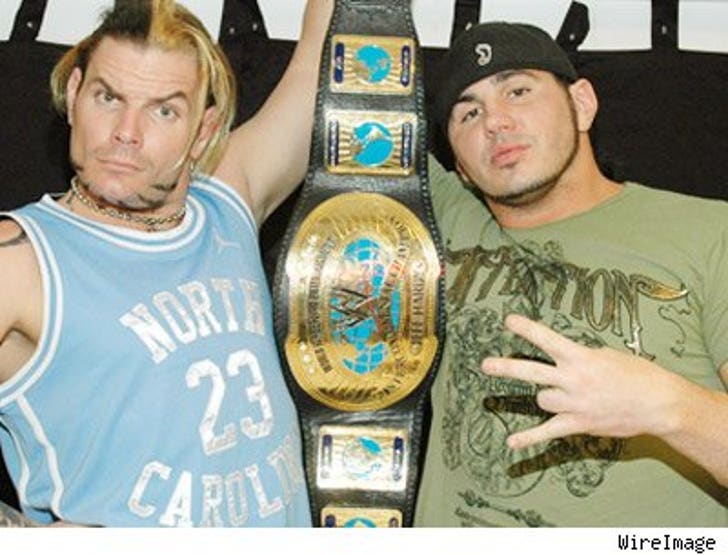 "I was having a pretty standard "gotta fly out early and go to work tomorrow" Friday night. I was washing and packing clothes, booking my rental car, and writing bills to put in the mail on my way to the airport in the morning. Around midnight on Saturday, March 15th, I let my beloved pet dog Lucas outside to use the bathroom. As I stepped outside, I smelled smoke."

I walked around to my garage area and could see huge flames burning through the woods. The large flames appeared to be very close to Jeff's place, about a third of a mile away from my house. My first initial thought was that Jeff was burning either trash or a brush-pile. I then questioned my thought, considering how big the size of the flames looked. For a second, I thought it might be the huge ramp on Jeff's motocross track or his old recording studio. I quickly jumped in my car, and drove down the back road that connects our two properties.

As I pulled around the lake that bordered Jeff's home, I witnessed a horrific mental image that will always be etched in my mind. I could see over Jeff's recording studio that and my brother's home was engulfed in flames. I violently stopped my car, jumped out, and ran towards Jeff's burning home yelling for my brother at the top of my lungs. My initial fear was that Jeff and Beth were burning to death inside their house. And I was the only person on the scene-I was frantic. I ran onto the front porch, kicked at the flaming front door, yelling for Jeff and Beth. I could only stay there for a second-the temperature of the heat was unbearable, and I couldn't breath due to the smoke and lack of oxygen. The entire structure was covered in flames. I ran to the other side of Jeff's place and saw that his car was gone. I internally prayed that Jeff, Beth, and Jack weren't in there. I didn't have my cell phone on me because I had left my house in such a panic. I jumped in my car and raced back home to get my phone. About this same time I got into my car, I could hear sirens-signifying that the fire trucks were on their way.

I got home and called Jeff. It went straight to voicemail, my heart dropped. I called Beth and she picked up. I hysterically asked if Jeff was there and he was. Jeff and Beth had been out to eat and he was currently getting the Hardy Boyz tattoo on the back of his neck filled in at Shannon's shop. I frantically explained what was happening and that he had to get there now. The first thing Jeff said was this-"Matt, can you kick down the door and get Jack? Please get Jack Matt!" It was heartbreaking. I told Jeff that it was too late, everything was gone. The fire had destroyed everything.

I was already back on the way to Jeff's burning home as I was getting off the phone with him. By the time I returned to the scene, the fire department was there, and they were fighting the fire. There were fire trucks and police and emergency vehicles everywhere-it looked like a scene out of a movie. When Jeff and Beth finally got there, the shock of reality truly set in on them. I have never felt so bad and helpless and powerless for two people before. It took the fire fighters until almost 4 a.m. to put out the flames. With the exception of the clothes on their bodies, everything that Jeff and Beth owned had been destroyed. But the most tragic lost to them was their beloved dog Jack. Jeff and Beth were crushed. If you've ever been extremely close to a pet, you know how painful it is to lose them. It's like the pet becomes your child.

About 5 a.m., Jeff and Beth came to my house-which is now their house for the time being. Neither one of them could even think about sleeping, and they were both still in shock. I made sure that they knew where everything was in my house and how it worked-so they could function independently in my place. I spent some time talking to them, and then finished packing my stuff. I headed to the airport to go to Louisiana about 8 a.m. without any sleep. This was definitely one of the worst days of my life.

Five days later, it's still surreal. It's still so hard to believe that this has actually happened. I thank God that Jeff and Beth weren't inside the house asleep. As of right now, it seems the fire was started by electrical wires that had been unknowingly damaged underneath Jeff's place. There's so much misinformation out there, I wanted everyone to hear and understand the truth behind this tragedy.

As I type this, I hear Jeff upstairs coughing due to being sick. I have never seen my brother as stressed out as he is right now. Jeff is sick because his body is so run down from not sleeping and being stressed out. He needs all of our support now more than ever. Jeff has done so many good things for so many people across the world-now is the time I hope everyone remembers that.

The support and help that has been offered courtesy of family, friends, and fans has been amazing. Thank you. Calling, texting, or sending a message to support another human being that has just went through a personal tragedy means alot. It tells so much about a person's character. In addition, not contacting or showing support also is very telling of a person's character.

I've received several thousands of request from people wishing to help Jeff and Beth during their crisis. Speaking for them, we are very thankful for all of you. If you want to help, here's what I suggest. If you have a good picture of Jeff and Beth together, frame it and send it to me. If you have any extras of Jeff's old wrestling memorabilia-pictures, action figures, magazines, etc.-send those to me. If you see some clothing that you think would look good on Jeff or Beth, send that to me. Any item that you can think of that are similar to these things-that's what will be the hardest for them to replace. They're looking into building a new house now, but all of you could contribute the things that truly build a house into a "home." Anything they would need to complete a new "home"-that's what Jeff and Beth need now. If you have something to send, send it to..

That's all for now. But I will keep you updated on things. Feel free to pass this info on to friends, websites, and anywhere else you choose. To all of you that have shown so much love and support, I eternally thank you. Be well my friends, and take care of each other..

Quote of the day - "If you've ever lost a loved one, I pray for you, I really do" - Hurt, House Carpenter