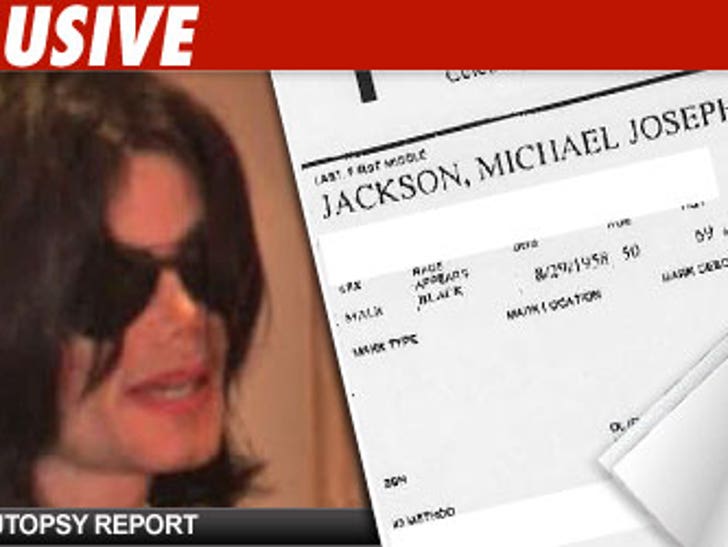 TMZ has just obtained a copy of the full L.A. County Coroner's report in the death of Michael Jackson -- which until now was under seal. The conclusion is clear ... Propofol killed the singer.

According to the report, the manner of death is homicide and the conclusion is based on the following 4 items:

1. Circumstances indicate the Propofol and the benzodiazepines were administered by another.

2. Propofol was administered in a non-hospital setting without any appropriate medical indication.

3. The standard of care for administering Propofol was not met. Recommended equipment for patient monitoring, precision dosing and resuscitation was not present.

4. The circumstances do not support self-administration of Propofol.

The Coroner's report was under wraps until the criminal complaint was filed and it will be a centerpiece in the prosecution of Dr. Conrad Murray on charges of involuntary manslaughter.

UPDATE: In the Coroner's report, the scene at Jackson's house is described in detail, and the bedroom sounds like a hospital. There was a chair next to the bed -- "reportedly the decedent's doctor sat here." Also there -- a green oxygen tank, prescription meds, medical supplies, a box of catheters, disposable needles and alcohol pads. Also found -- near the foot of the bed ... a closed bottle of urine.

Also, there was talk about Jackson's hair and reports he was bald. In fact, the Coroner's report says, "The decedent's head hair is sparse and is connected to a wig."

As we first reported, authorities found 11 vials of Propofol ... 3 100 ml vials and 8 20 ml vials. None of the bottles had prescription directions, patient or doctor names.

They also found liquid Midazolam (anti-anxiety), Lorazepam liquid (injectable) and 14 capsules of ephedrine (for narcolepsy and depression), caffeine aspirin, Zanaflex (a muscle relaxer) and Prednisone (for skin conditions). There was also Azithromycin (an antibiotic), prescribed by Dwight James/Cherilyn Lee and the patient name was Kathlyn Hursey.