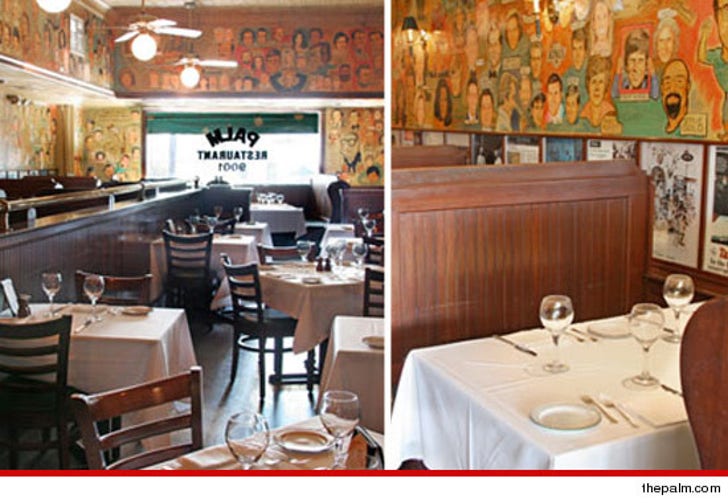 11/26 -- A rep for The Palm has released a statement to TMZ ... claiming the allegations against the restaurant are "quite simply, untrue."

The rep adds, "At The Palm, we take all health inspections, very seriously. In addition to random inspections by the Health Board, we employ an independent third party quarterly auditor to assist us with conformity assessment to pre-established regulatory, industry and proprietary brand standards."

"Our West Hollywood location has always maintained the A rating by the Health Department and receives high scores by our independent auditor."

The former Executive Chef at one of the most legendary celebrity restaurants in Hollywood has filed a lawsuit, claiming the eatery is riddled with problems, including allegations of some disgusting bathroom lapses ... but the suit's a little suspicious because the health dept. has consistently given the eatery an A.

Humphrey Lansiquot claims he was fired as Exec Chef from The Palm in West Hollywood, after lodging a slew of complaints, including:

And, the most shocking allegation of all -- "customers were unaware that steaks, lobsters, fish, crab cakes, baked potatoes and other food dishes were micro-waved." He also claims the restaurant would pass off Strip Loin Vein Steaks as other cuts of meat.

Lansiquot claims he constantly complained about the practices to management and was told "to keep his mouth shut." He says after he was fired, management "began replacing faulty and unsafe equipment and instituted new procedures in an attempt to cover up the issues Plaintiff complained about."

Interestingly, the suit makes no mention of Laqnsiquot ever going to the health dept. to complain. In L.A. County restaurants are inspected without warning and graded, and the last 4 times (that's as far back as we can check), The Palm has gotten an A.

The restaurant is a fancy chain that has franchises in NYC, Washington D.C. and many other places. It's famous for the caricatures of celebs on the wall.

Fun fact: After OJ Simpson killed Nicole Brown-Simpson and Ron Goldman, there was a lot of controversy over whether OJ's caricature should be removed. After lots of debate, it was replaced by Marcus Allen, the football player who allegedly banged Nicole Brown Simpson.