Kevin Clash -- the former voice of Elmo -- used alcohol as a precursor to oral sex with an underage boy ... this according to a new lawsuit that has just been filed by a THIRD accuser.

According to the lawsuit, filed in federal court in Manhattan and obtained by TMZ, the alleged victim met Clash on a gay phone chat line when he was 16 and Clash was approximately 40.

The accuser -- now 28 -- says he was in NYC pursuing modeling opportunities when Clash invited him to his swanky NYC apartment, which was strewn with Elmo dolls and photos of Elmo with famous people, including Beyonce and Tyra Banks.

During the encounter, the accuser -- who refers to himself as John Doe -- claims Clash plied him with alcohol and "groomed him," and then engaged in sexual contact that included "oral sex and digital penetration of John's anus."

The accuser says Clash stayed in touch with him after the sexual encounter, although no further sexual contact occurred until he became an adult.

The accuser is suing for unspecified damages.

As you know, Clash resigned from Sesame Street hours after the second accuser filed suit. 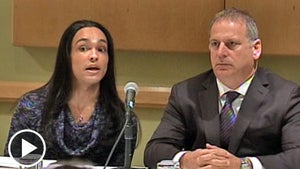