A deadly serious deputy made an urgent radio call to his dispatcher, sounding the alarm that 20 shots were fired near an elementary school ... and TMZ has the audio.

The incident went down in Wilmington, N.C. last week, when a TV production crew -- working on a Stephen King show, "Under the Dome" -- staged a shootout scene in a park near the school. The shots were fake, but no one clued in police or school officials ... and they treated it like the real deal. 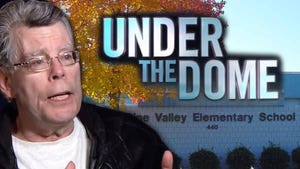