The family of Lisa "Left Eye" Lopes' feels betrayed by TLC's decision to re-record "Waterfalls" with a Japanese pop star ... because no one even bothered to tell them.

T-Boz and Chili recently released a new version of the group's 90's hit -- in honor of their 20th anniversary . Instead of keeping Left Eye (who died in 2002) on the recording, they replaced her with Namie Amuro (think Britney Spears of Japan).

Left Eye's sister, Reigndrop Lopes, is extremely disappointed, telling TMZ, "I did not know about it until a fan posted it online. I mean it would have been nice if they would have given us a heads up before being surprised."

Reigndrop says her mom was shocked and hurt as well ... because she felt keeping Lisa on the song would have honored her daughter's memory.

Despite her disappointment, Reigndrop added she's alright with the remake ... if, and only if, it's only released in Japan. It's unclear if that's TLC's plan.

UPDATE: Reigndrop now says she's cool with the remake ... as long as 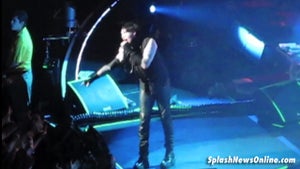