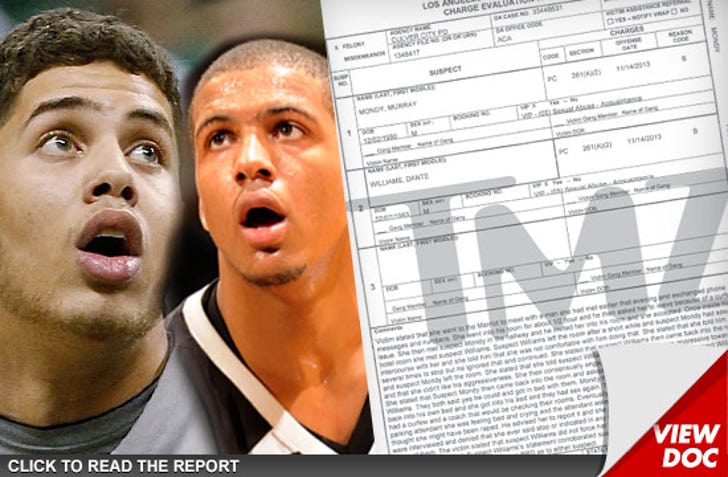 The woman who accused Oakland Univ. basketball stars Duke Mondy and Dante Williams of rape had a wild night of sex before making her allegation ... this according to official documents obtained by TMZ.

The L.A. County D.A. rejected the case within 24 hours, and now we know why.

Mondy and Williams were in L.A. to play UCLA. After the game the alleged victim met Williams at the Marriott Hotel in Culver City. According to the D.A. document rejecting the case ... she went to Williams' room but he told her to leave because he was under a curfew.

The woman then met Mondy in the hallway, who invited her to his room. And that's when the sex started.

The woman says she had sex with Mondy but claimed she wasn't comfortable and she had told him to stop several times but he ignored her. Then Williams entered the room. She says she then had sex with him and groused about how aggressive Mondy had been.

Now get this. Then Mondy came back in the room and he asked if he could jump in bed with the woman and Williams, and everyone obliged.

After the 3-way, Mondy went back into his own bed and she climbed in for another round of sex.

The guys eventually asked her to leave, and when she hit the parking lot she started crying and told the parking attendant she "thought" she "might" have been raped.