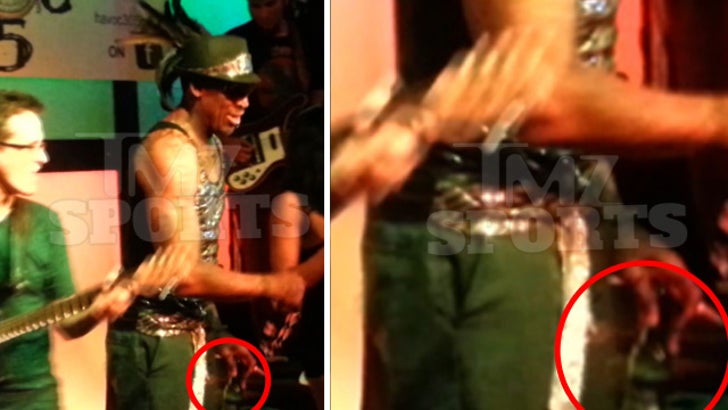 Dennis Rodman was back to "North Korea mode" this week -- clutching a beer bottle and acting like a wild man at a hotel in Florida ... and TMZ Sports has the footage.

The Worm was at the Hard Rock Hotel in Ft. Lauderdale on Tuesday -- when he grabbed a bottle and hopped up on a stage with a live band that was playing the Pearl Jam classic "Better Man."

At one point, Rodman took over the mic and belted out a verse while jumping around the stage in his sequined tank top and feathered hat combo.

After the song, Dennis grabbed his bottle and went back into the crowd.

Of course, Rodman checked into rehab in January after his disastrous trip to N. Korea -- where he admitted he had been drinking like a fish right before his infamous screaming interview with CNN.

We reached out to Rodman's camp for comment -- so far, no word back.