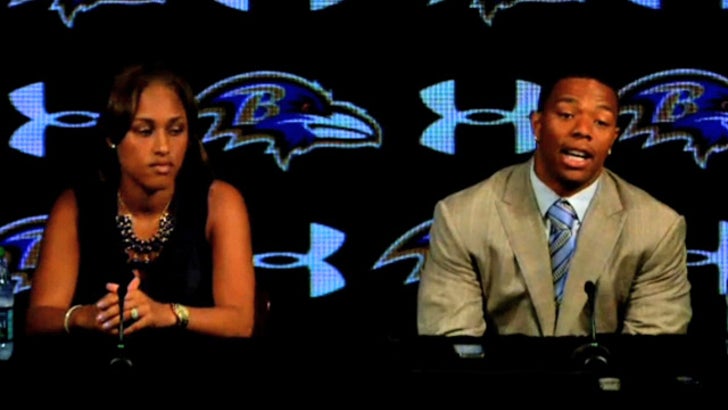 Ray Rice and his wife Janay Palmer just addressed the media TOGETHER -- both expressing regret for the violent incident at a NJ casino back in February.

Ray spoke first ... apologizing to the Ravens ... and adding, "I also want to apologize to my fans, to the kids, to anyone who's affected by this situation that me and my wife were in."

Ray said the two have gone through counseling and feel the experience has helped them out as a couple -- "Throughout this time, we really had time to reflect on each other."

"No relationship is perfect, but me and Janay together, when counseling is done for us, we want the world to see that it did help us out."

Janay also spoke and said, "I deeply regret the role I played in the incident that night." Neither Janay nor Ray gave any details about what led up to the incident and what happened inside the elevator.

Ray added, "Me and Janay wish we could take back those 30 seconds of our life."

For the record, Ray never admitted to striking Janay that night ... despite the fact he was arrested for assault. He also never mentioned the video showing him dragging Janay out of the elevator.

As far as the criminal case goes, Rice recently struck a deal with prosecutors to enter a pretrial intervention program -- a program that allows defendants to avoid prosecution pending the completion of a specific set of rehabilitative conditions.

If he can satisfy those requirements, prosecutors will drop the 3rd degree aggravated assault charge.