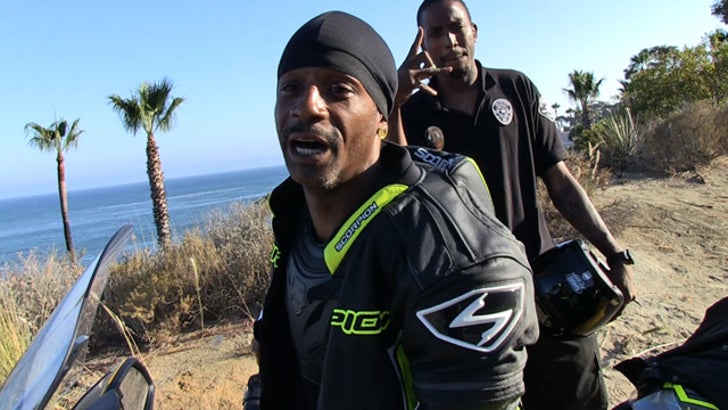 Katt Williams got pulled over in Malibu Tuesday evening by Sheriff's deputies investigating his security guard for tasing a random guy on Pacific Coast Highway,

Law enforcement sources tell us the guy started kicking a car driven by Katt's assistant ... who was following Katt while he rode a Can-Am Spyder. When Katt's security guard got out of the car ... we're told the stranger got aggressive, and the security guard zapped him with a taser.

The guy then waved down Sheriff's deputies in the area and explained what had happened. Deputies tracked down Katt ... pulled him over and questioned him and the guard about the incident.

We're told, as of now, no one's getting arrested -- not Katt's security guard or the guy he tased.

One of our photogs spoke to Katt on the side of PCH just a few moments after the incident, and his version jibes almost 100% with law enforcement.

He did add that the guy claimed to be a lifeguard, and hurled the n-word during the altercation.

Here's what's funny about this -- we initially got a tip that Rihanna had been pulled over on PCH. Turns out "Rihanna" was really just Katt's assistant ... who must be smoking hot.