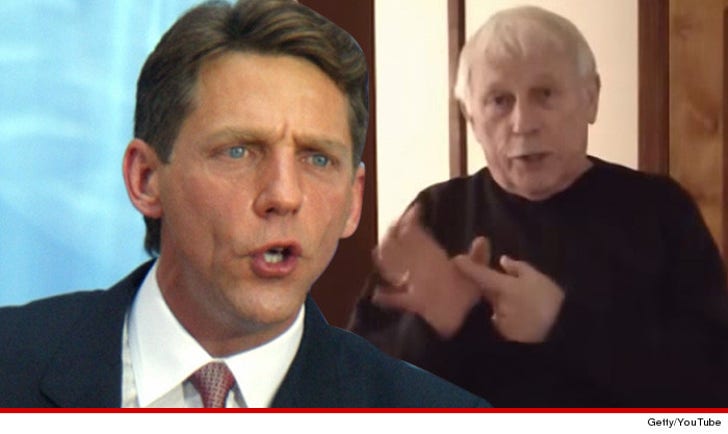 A private investigator was arrested with an arsenal of weapons ... he says while he and his son were mercilessly harassing Scientology leader David Miscavige's father, and at one point when it appeared David's dad was having a heart attack the P.I.s say David told them to just "let him die."

The claims are absolutely shocking. P.I. Dwayne Powell and his son Daniel were on a job in West Allis, Wisconsin in 2013, where Ronald Miscavige lived with his wife. Dwayne says he was surveilling Ronald Miscavige for a year and a half on orders of the Church. Dwayne says the Church was worried Ronald -- who left Scientology -- would "divulge details about the church's activities."

Dwayne says he and his son were paid $10,000 a week to tail Ronald, and harass him. They would search his garbage, sit next to Ronald when he went to restaurants, stand behind him when Ron went to the library to check his emails so they could view the screen, and on and on.

According to the police report, obtained by TMZ, Dwayne said on one occasion "Ron was loading his purchases into his car and slumped over while grasping his chest." Dwayne and his son thought Ron was having a heart attack so they called their Church contact. Dwayne says 2 minutes later he got a call from a man who identified himself as David Miscavige. The police report says Dwayne recounted that David told him, "If it was Ron's time to die, to let him die and not intervene in any way."

Dwayne was arrested in July 2013, after witnesses reported he was acting suspiciously. When cops searched his car, they found an arsenal of loaded weapons, including a silencer and hundreds of rounds of ammo.

Most recently, in September 2014 ... Ronald went to cops again and said he was still being followed and someone had gone through his trash. He told police David was afraid he would "speak with the media about the negative inner workings of the church and David's abuse of the members of the church."

David Miscavige's lawyer told the L.A. Times, which broke the story, that David did not know Dwayne Powell, hasn't heard of him, hasn't spoken with him and never hired him.

The L.A. Times says Dwayne Powell was indicted last year on possessing an illegal silencer, but the indictment was dismissed and he was allowed to enter a pre-trial diversion program.