Vince McMahon proudly hurled the n-word on national TV, which makes his decision to fire Hulk Hogan for the same offense outrageous ... so claims Hulk.

Vince was doing backstage color after a WWE event back in 2005, when he very deliberately used the n-word as he pranced away from John Cena. Even more shocking, he said it right smack in front of black wrestlers Booker T and Sharmell.

Hulk is outraged Vince is acting so self-righteous, condemning him for spontaneously using the epithet in private when the wrestling boss used it in a premeditated way, on TV and for profit.

Several pro wrestlers like Virgil and George Foreman have to come to the Hulk's defense, as well as his daughter.

But a WWE rep says everyone recognizes the 2005 segment "was an outlandish and satirical skit involving fictional characters, similar to that of many scripted television shows and movies.” 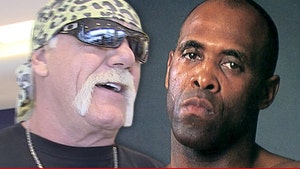 WWE Legend Virgil -- The Hulk Hogan I Knew Was Not Racist