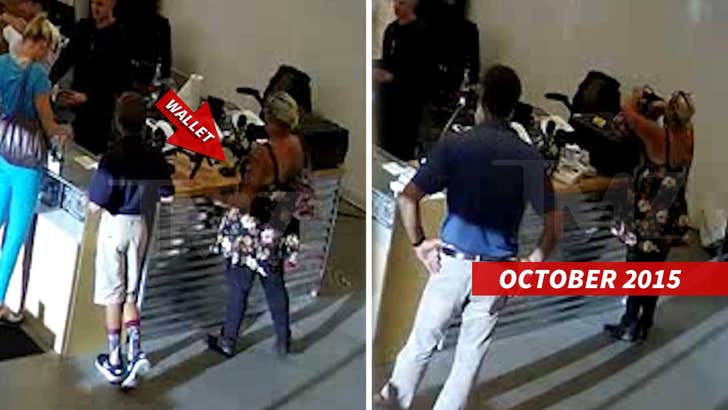 "Operation Repo" star Sonia Lopez got busted twice taking possession of a guy's wallet and the $3k in it -- first by surveillance cameras, and then by cops.

Sonia strolled into Drones Plus last month, an L.A. tech store, and you can see in the video ... she makes a beeline for a wallet left on the counter. Sonya made a slick move, knocking the wallet to the ground, then tossing it in her purse. She even lingers ... oblivious to the security camera.

The alleged victim tells TMZ he had more than $3,000 on him because he was about to make a purchase. Once he noticed it was missing, he asked the store owner to check the cameras.

He says the store had Sonia's email address, so he reached out and told her he wouldn't press charges if she returned the wallet. When she didn't respond, he went to cops ... who told Sonia the jig was up.

She eventually surrendered and was booked for felony grand theft.

Sonia tells us she initially planned to return the wallet for a reward, but panicked when she didn't see the owner around -- so she decided to toss it in a parking garage instead. She claims she never knew what was inside. Sonia's already pled not guilty.