Madonna let it be known there's only room for one diva on her tour -- and that's her -- after she lit up fans who booed her for showing up late for a Manchester, England concert.

Madge blamed Monday night's delay on technical difficulties, but first she responded directly to the sea of boos in the most Madonna way ever: "All you bitches who keep complaining about it can shut the f*** up!"

Her tirade got even more detailed ... you gotta hear her run down of what she was NOT doing during the delay.

Even at 57, Madonna can still get her bitch on. 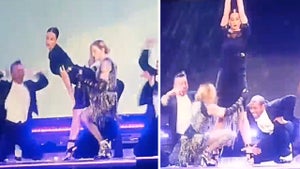